Mark McDonald of Combine Academy (GA) was one of the senior standouts from the Super 64 Camp. Photo – Ty Freeman

Atlanta, Ga– The On the Radar Hoops Super 64 Camp provided the perfect stage for many regional players to display their skills to college coaches. Here are a few players that caught our eye on Sunday afternoon.

McDonald made his way to Central Gwinnett from the Combine Academy in North Carolina and made his presence felt at Super 64. A traditional point guard is the best way to describe McDonald’s game on the floor as he seems to make all the right decisions in any situation. McDonald plays the game with great pace knowing when to drive and finish or find a cutting teammate in the half court. The unsigned senior changes speeds with best of them and I loved his communication on the floor as he always encouraged teammates after good and bad plays, displaying the intangibles of a floor general in just a few hours of full court play. 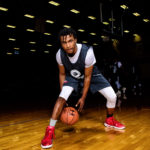 With a talented duo in big man Bryce Brown and guard Malik Sproles, it’s hard to think that Archer only made it to the first round of the state tournament. Regardless of their team success, Sproles opened eyes at Super 64 with his play during 5 on 5 competition. I loved the physique from the unsigned senior as he noticeably looked like a man amongst boys at the guard position. He has a great handle on the basketball, finished layups through contact, and found the right teammates on the break. Sproles is an ideal two-way player as he took pride in his defense and while continuing to be a reliable scorer on the offensive end as well. Whether his made field goals included shooting from deep or punishing the rim for emphatic dunks, Sproles plays the game the right and is a solid combo guard for the next level.

Another prospect that caught my eye early during the day at Super 64 was Walnut Grove guard Ryan Landers. He is a high-flying guard that also had one of the quicker first steps in all of Super 64 camp. During a time where the rules called for a maximum of 3 dribbles at the top of the key before you could attempt a shot, Landers was getting the job done in 2 dribbles. He is a volume scorer that gets to where he’s going more times than not. Defenders would later try and change their approach by giving him space, honoring his quickness for drives to the basket, but you are often times still at a disadvantage because you have given him too much space for a reliable jumper in the midrange area. Landers is clearly a headache for defenders and he will look to improve off of multiple 20 point performances in his sophomore campaign this past season.

’20 Walnut Grove (GA) G Ryan Landers has a quick first step and nice size to finish at the rim. Good showing in the 1 on 1 portion at #Super64. @RyanLanders8 @WGHSbasketball @ClubOrange2021 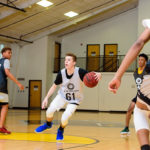 With all the athleticism at Super 64, it was tough finding a pure knock down shooter, however we were still able to do so in the form of sophomore Jasper Gibson. The Jefferson Dragon guard can fill it up from the outside but his playmaking ability once everything else opens up because of that jump shot is what separates him from the rest of the pack. His quick release is pivotal when being able to get off a good shot against premiere athletes but he does so a high rate as he was shooting an impressive 41% from deep well into the season. He’s another cerebral player with or without ball and that makes him hard to guard because he knows how to get easy shots and set up easy shots for teammates. 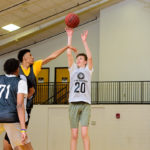 Champion is a skilled high post player. He can feasibly play either forward position. He has good size with room to add weight if needed. He is a big-time shooter who makes shots in bunches and can never be left unchecked anywhere within 25 feet of the rim. He can handle and pass the ball in the open floor, will attack bad closeouts off the dribble, and isn’t afraid to mix it up inside the paint to battle for rebounds.

Hester was a double-double machine this season. He runs the floor extremely well can finish above the rim with a clear path. Hester is a good shot blocker. He is mobile and does a good job patrolling the lane. He post up well and provides the passer with an excellent target hand. He likes to score in the post and facing with spin moves in order to improve his scoring angles. 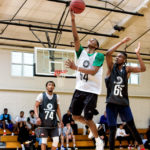 Green has that prototypical wing-type frame with long arms and his explosiveness is impressive. He is quite potent in transition where he knows how to finish at or above the rim. He plays with great energy and can make plays at both ends of the floor due to his length and quickness. He has the ability to rebound in traffic and lead the fast break.

He is a true point who makes plays for himself and others, has a tight handle, good court vision, and pinpoint passing ability. He can drive to score or dish and shows great ability to read the defense and make decisions while in attack mode. Evans does a good job of applying on the ball pressure and even forcing turnovers.

He excels in transition where he attacks the rim where he can finish with a floater or at the rim. In the half court, Brooks is a good straight-line slasher from the wing and can make open shots with time. Defensively, he is hard-nosed defender who is especially affective at blocking shots in transition. 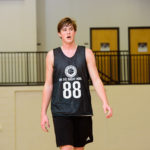 Towns has steadily improved in the past year and his frame has filled out as well. he is deceptively bouncy and has a variety of ways to score in the paint. He knows how to post up; he gets big, has good hands and knows how to pass to cutters or find spot up shooters on the perimeter. He fights for position on the defensive end; with his size is difficult to score over and he has good timing when blocking shots.

Donta Elbhart is a contributor to On the Radar Hoops