Sophomore forward Dylan Cardwell of Evans (GA) is a player to keep an eye on this spring and summer. Photo – Ty Freeman

Atlanta , Ga., – The Super64 Camp presented the perfect opportunity for high school aged prospects to get exposure and play against top competition after the high school season. With multiple media sources, college coaches and post-season award selectors on hand to watch. Here are a few players from the event who elevated their status with their play. 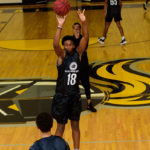 Ard has good leaping ability and athleticism. He utilizes his natural gifts most often on the offensive end, playing with a great deal of energy and enthusiasm. He has a very quick first step and can get to the rim with relative ease off one or two dribbles. Defensively, he does a good job of controlling the paint, being active on the glass, and blocking/altering shots.

Higgs at 6-foot-5, is a skilled combination forward that can flat out shoot the ball. He has a pretty stroke and knocks down open three’s and mid-range shots off the catch with regularity. He does a good job reading penetration and screens as he spaces to an open area.

He is a shooting guard that is always on the attack. He gets to the rim in transition and finishes with acrobatic layups and pull up jumpers. He has a good burst of speed and terrific first step that allows him to beat defenders off the dribble. He is streaky from behind the arc but good enough to draw out the defense. 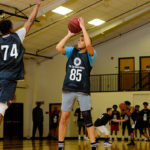 He is a consistent catch and shoot threat from behind the three-point line and is also good enough with the ball to get into the lane scoring off slashes to the basket. Defensively, he is a very good on-the-ball defender as he gets low in his stance, works to pressure the ball, and moves well laterally.

Edwards excels in transition and in the half court with slashes between defenders. He is athletic enough to finish above the rim on the break or in traffic. He is a very good baseline driver and has the speed and quickness to beat the help defenders to the rim. He is a multiple position defender because of his great athletic ability that consists of quick hands and great lateral foot speed. 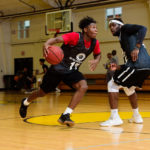 Covington possess speed and quickness. He sees the floor well and displays pinpoint passes up the court. When he attacks the rim he can finish or dish it to welcome teammates. Good defender who can play passing lanes well.

His speed is the calling card and he’s got plenty of it. Crawford has the ability to penetrate the defense and find shooters. His best attribute is that he’s got an edge to him and pushes the basketball with purpose. He constantly puts pressure on the defense with his attacking style. 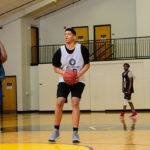 Cardwell is a true center that is mobile and has good hands. He has great size and can score, rebound and defend and has the ability to change the game. He is a huge post target that can score with power drop steps, jump hooks and drop off passes created by dribble penetration that he finishes above the rim with a clear path or direct angle. Cardwell will only continue to get better and will be a prospect to keep an eye on in the 2020 class. 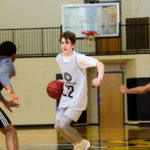 There are not many guard who have the saavy and IQ of Bidwell. His skill level off the dribble enables him to get by most any defender and into the paint where he is a creative passer. He is fearless when attacking the basket and has an uncanny knack for scoring over posts with a floater or using the rim as a shield.

McConnell is a strong built point guard with a good basketball IQ. He handles the ball with ease and can penetrate and kick or finish through contact. He has a nice pull up in the lane when he draws a second defender or knock down the open shot given time.

Over the past year, Floyd continues to get better developing his skill set and gaining an understanding of the lead guard position. He can swing between both guard positions because he possesses a good IQ. He is crafty working along the baseline and has a smooth looking jump shot from the mid-range area.

Jackson is a solid point guard who can both score and distribute. He has good quickness and speed with the ball. He’s an above average shooter to 19 feet but could be more consistent. Good defender who can play passing lanes well.

Donta Elberhart is a contributor to On the Radar Hoops