Under the radar players make a name for themselves at the Sweet 16 Session II.

Powder Springs, GA – This past weekend players piled into McEachern High School ready to showcase their skills, so did bunches of coaches from all over the country. Sweet 16 Session II was filled with tons of talent from high major to unsigned SR’s hoping for one last chance to be seen. It was clear from the start of the first game Friday night the weekend would be filled with highlight plays & tons of buzz surrounding these games. With elite Nike teams like AOT & E1T1 in attendance, coaches were sure to line up asking the baseline. But with independent teams like PSB Select & Team NLP boasting up & coming talent as well, the matchups were everything short of a disappointment.

Ty Crankfield | 3 Point Play – An unsigned SR who averaged around 24 points per game for Campbell (GA). Crankfield can put the ball in the bucket. At only 5’9 he caused problems all weekend with his lightning speed. He can shoot if off the bounce or catch and get in the lane amongst trees and finish. Must improve his playmaker ability but that comes with time and reps.

Latrelle Tate | Southern Stampede Tate – Another unsigned SR that has consistently proven he can score the ball. In his Osborne career he scored over 1000 pts for the Cardinals. Tate is a bit undersized but makes up for it with his IQ and motor on both ends. Coaches looking for someone who can get a basket at the end of the shot clock or create something from nothing, Tate could be worth a look in the ’17 class. 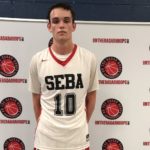 Duncan DeMuth | SEBA Select – One of the more highly touted recruits in attendance, Demuth had a good performance Friday night against Kalu Ezipke of Discovery High School in Georgia.  At 6-foot-8, Demuth can put the ball on the floor and start the break after the board or create for his teammates in the halfcourt after breaking down the defense. His motor is no question; he plays hard on both ends of the floor and provides matchup problems for smaller wings and forwards.

Luke Anderson |E1T1 – Anderson showed why he is one of the rising stars out of Florida in the ’19 class. Anderson is a forward who forces the defense to cover the three because of his shot making ability. If they close out too fast, Anderson can put it on the deck and make a play at the rim. He knocked down the midrange with ease all weekend finding easy baskets around the high post area. Once Anderson fills out his 6’7 frame, he’ll be an even harder cover for slower forwards to guard.

Messiah Thompson | Nike South Beach – Messiah Thompson caught my attention instantly Friday night for Nike South Beach. He’s a small guard that could best be described as game ready. Thompson carried his team through the first half with his array of floaters and midrange jumpers in transition. Thompson doesn’t over penetrate and force the issue, he picks his spots and rises over defenders. He knocked down big shot after big shot in pro matchups with the likes of B Maze Elite & PSB Elite over the weekend. Look for his stock to continue to grow this upcoming summer and school year at Pebblebrook High School. 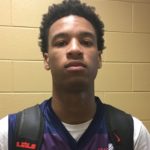 Mandarius Dickerson | Heat Check – Dickerson plays with good energy on both ends of the floor. In transition he can get to the rim when he receives a pass while running outside the lane. He can finish at the rim or draw the foul where he likes to slash from the wing or shoot the running floater in the lane. He also showed the ability to connect on multiple jumpers from deep or the mid-range area. 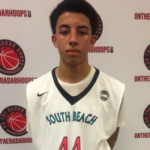 there is a certain pace and poise to his game. Even as he attacks to score he sees the defense and makes last minute passes to open teammates. Pippen Jr shot the three well when he decided to shoot, most times he just broke the defense down and displayed the true PG we rarely see today. Unaffected by pressure, there was almost no answer to keep him out the painted area.

Garrett Hicks | Team Vigilance – Hicks was a pleasantly surprising talent last week that solidified himself in Session II this week. Only a sophomore in the 2019 class he played up in the 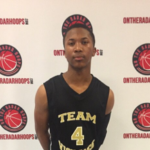 17U and looked like he belonged. With multiple 23 + point performances the past two weeks the 5’11 Guard showed he is a natural born scorer at the PG position. As he hit 3 after 3 he never was phased by the double teams constantly coming his way. Out of Alabama, Hicks will surely take the basketball world by storm.

Preston Urbancic | Team Speights – In his second game of the weekend Urbancic caught fire nailing (7) three pointers for a total of 25 points in a win. This sophomore wing has the ability to reel off several three pointers in a row once he catches fire. Urbancic also showed that he was more than capable of attacking the basket in a straight line where he was able to finish through traffic.