Many of the top programs around the state of Georgia participated in The Wheeler Hoops Classic.

Marietta, Ga – A number of teams from the state of Georgia showed up to face off against some of the top talent at The Wheeler Hoops Classic, which was hosted by Wheeler High School.. Here are some of the individuals that stood out in these early season match-ups.

Usher got into a rhythm in the second quarter which helped the Wildcats pull away from Greenforest. He is quite potent in transition where he knows how to finish at or above the rim. He plays with a ton of energy and can make plays at both ends of the floor due to his length and quickness. Usher finished with 19 points and 10 rebounds in a win at his new home.

When Jordan Usher is on a mission…

The Auburn signee is a versatile, hybrid post-player who can play either the 4 or 5. He has a really good motor on the floor, is very active and runs the floor well. Montgomery got into a groove in the second half, where he was able to score from the high post and take his defender off the dribble to get to the basket.

Once he gets in a zone, Sexton can put points on the board in a hurry. That’s exactly what happened in the second half Saturday against a talented Berkmar group. The Alabama signee knocked down (2) deep three pointers, one in which was a four point play. On the third possession, Sexton attacked the defense and finished scoring the last nine points for Pebblebrook. Sexton finished with 35 points in front of his future Head Coach Avery Johnson. 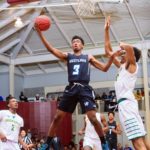 Lewis was the most efficient scorers that we saw on Saturday, he showed that he could score off the catch or dribble knocking down several deep three pointers. Lewis did all this handling the majority of the ball handling duties in the absences of his younger brother Jamie Lewis. Westlake was able to hold off a late surge from Southwest Atlanta Christian, Lewis finished with a team high 20 points.

Minor has a combination of size and skill He has a feathery touch out to the 3-point line and he can knock it down consistently from the elbow. He has soft hands and is an adept passer as well. He showed the ability to be equally effective on defense. 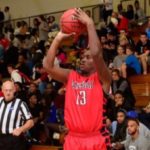 After a strong performance to start the season, Xavier Bledson of Gainesville High School picked up an offer from Florida Gulf Coast. As the season progresses look for more programs to offer the junior wing. Bledson is a versatile prospect that can do a variety of things at both ends of the court, he has a high IQ and a crafty handle which allows him to create separation to get his shot off or get into the lane to finish.

Saturday night Brandon Favors emerged as one of the notable performers. Favors plays with tremendous energy and effort on both ends of the court. He has quick leaping ability which he utilizes to rebound in and outside of his area. He was constantly getting a hand on the ball on the offensive end of the floor to provide second chance opportunities.  Favors has a great deal of upside with his best basketball days ahead of him due to his blend of athleticism and length.

There have been plenty of college programs to stop by Columbia High School Lorenzo McGhee. Over the weekend we had an opportunity to see why his stock has continued to rise. McGhee is a strong and physical wing that plays with great energy and is in attack mode at all times. He can score in transition by getting to the rim and in the half court he is a powerful driver that can score through contact on a consistent basis. McGhee is also capable of hitting the open jumper with time.