Many of the top players in the country competed in the Underclassmen All-American. Photo – Horace Neysmith

Marietta, Ga – The Underclassmen All-American Game is the premier all American game. The event attracted elite players from across the country who competed against each other during scrimmages and game play. Here are a number of prospects that caught our eye from this weekend’s event. 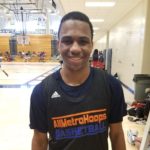 Dwon Odom received co-MVP honors in this past weekend’s Underclassmen All American game at Wheeler High School. Odom is one of the few athletic guards we have in the loaded 2020 class. He was able to show his athleticism and bounce all game long. Hitting his jump shots and three pointers was one attribute he also showed on Sunday. The 6’1 guard will be in the next set of rankings after this summer. Dwon will be running with the Atlanta Celtics (GA) this summer in the Adidas Gauntlet.

This kid right here will be a prospect college coaches will want to watch. Josh was very energetic the entire game this past Sunday on defense and offense. He is a shot creator and has a quick first step that can get him past his defender. Josh will be running with Paul Pierce’s The Truth (CA) in the Nike EYBL Circuit. Christopher shared the MVP honors for the East squad with Odom of St. Francis (GA).

Walker might be the most athletic prospect in the class of 2020 besides Jalen Green. Kyree was not able to show all his skills on Sunday but he was able to show us his athleticism and explosiveness. He is a legit 6’6 and can play the 1, 2, or 3 positions on the floor. He has incredible handles for a kid his size, which can make him a mismatch problem for his opponents. Kyree will be running with Dream Vision (CA) in the Adidas Gauntlet according to his dad. 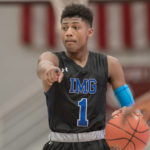 Noah Farrakhan is one of the smoothest point guards in the nation regardless of class. The 6’1 guard has a great feel for the game when the ball is in his hands. Being able to read screens and the defenses makes him special and he will only be improving over the years. He is able to get his shot off with a ball screen or without. He is certainly one of the best shooters will see in the class of 2020 as well. Noah ran with Nike EYBL’s Athletes of Tomorrow (GA) this weekend as well in their tip-off classic. He has yet to make a decision on who he will be running with this spring and summer. 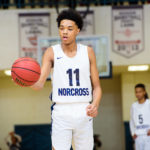 What a weekend it was for the sophomore Brandon Boston. Before receiving the West squad MVP honors in the UC All American game on Sunday, Brandon put on a show in this weekend’s AOT (GA) Tip Off Classic game against UAA B Maze Elite (TN) Saturday afternoon. The matchup between himself and top-25 nationally ranked prospect in Jaden Springer (Rocky River, NC) was a pleasure to watch. Boston posted a game high 29 points in that matchup. His growth on the court is happening right in front of our eyes. His field goal percentage is rising and he is hitting his shots from beyond the arc with ease, showing us he can be a perimeter threat. Brandon will be running with AOT (GA) in the Nike EYBL circuit this spring and summer.