On a talented Showtime Hoops team including break out wing Diante Smith, Keano Caulderon was sure not to be unnoticed this summer as he collected offers of his own. Caulderon has always been a long 6’5 wing with good athletic ability, but this summer he displayed he also had a skillset to match. He can handle the ball in the open floor on the break and make decisions on the fly or finish above the rim with easy flushes off one or two feet. Caulderon showed he could be a consistent three point threat as well as a slasher in the paint off the bounce. His deceptive handle lulls defenders as he blows past them looking to finish at the rim or draw contact. Only just a junior in the 2020 class, Caulderon could potentially be another breakout wing from Florida who could gather a host of high major offers as he already holds offers from FAU, BCU, UNF, Canisius, Stetson, & UNC Asheville.

Osei Price was a quiet yet consistent contributor for a talented Showtime Hoops team this summer. Osei can surprise defenses in the open floor with his deceptive athleticism. He caught unsuspecting defenders under the rim more than once catching coaches’ attention. His activity on both ends of the floor keeps him around the ball for steals, rebounds, or deflections. Price can make the defense respect his jumper from the 3 most games, but is most effective out on the break on the wing or as the lead guard making decisions. He earned offers from Canisius, Bethune Cookman, and others this summer. Price is another standout from Florida who has a chance to improve and see his stock soar and collect more mid-level offers.

Wright is a crafty cat quick guard out of Greene County, GA. Running with Infinite Skillz, Wright created a buzz for himself this past summer as an electric scoring point guard. At 5’8, he is a good shooter from deep capable of going on streaks of consecutive scoring possessions at any moment and has added a midrange jumper that he effectively converts. Early in the summer he faced a good Atlanta Xpress team and finished with 29 points. He can distribute the ball to shooters and break down defenses for easy drop-offs registering several double digit assist games over the live periods. His recruitment is starting to pick up but he must work on his body to become bigger and stronger this upcoming season. His Greene County team has a ton of talent and will be a dark horse in the single A class this year under first year head coach Greg Freeman. Wright will be the starting guard looking to be a main contributor for a surprise deep playoff run.

Infinite Skills 2020 trails at half to GA Stars. DJ Wright @djbballwright has had a strong first half with 12 points. Hit a couple long balls, got to the midrange, & pushed the break @EYASports @BuildYourBrand8

He has long arms with a quick release that he effortlessly gets off over defenders. He can get the ball out of his hands with accuracy and speed on the break off the catch or in the half court. He can make a play off of one or two dribbles and head fake defenders to get in the lane for floaters. Knight stood out vs AOT this summer dropping 24 points connecting on seven 3 point baskets. Adding more of a handle and playmaking ability will be huge for Knight entering his senior season. Lower level schools looking for a knock down shooter should be tracking him throughout this season.

South Fulton Lions Rickey Knight Jr. is as knockdown as they come in Georgia’s 19 class. Elite shooter knocked down (6) 3’s & finished with 22 points. At 6’4 Knight can get his shot off with ease & push the break. pic.twitter.com/jS3DOOfd23

King ended the summer as one of the Peach State’s hottest prospects emerging from the unknown with Team EAT. King’s stock rose tremendously after the first two live periods earning offers from Buffalo, Charleston Southern, ETSU,  FIU, FAU, & Murray State just to name a few. He is a 6 foot 7 inch 240 pound combo forward who can virtually do everything on the floor from rebounding, shooting the 3, handling the ball in the open floor, & finishing above the rim. You can find him POSTERIING a defender in transition online with a NASTY and-1 finish. He can do everything a smaller player or even a big skilled wing can do on the floor, besides handle on the perimeter and be a consistent playmaker. Besides that, he’s bigger; the same speed if not faster, and stronger than most with all the other attributes quality basketball players possess. With his versatility, size, supreme athleticism, and some improved shooting consistency, King has a chance to be very special. If he can put it all together, he is a player high majors will want to see for sure.  King was a man on a mission this spring & summer, and he did not fail.

Overrall, Jones is a good lead guard that can create in the open floor, quarter court, or coming off the ball screen. He has a tight handle, good court vision, and pinpoint passing ability. He can drive to score or dish and shows a good ability to read the defense and make decisions while in attack mode. He has floaters, pull-ups, and wide angled lay-ups in his offensive arsenal as well as the ability to connect on jumpers from deep and the mid-range area. 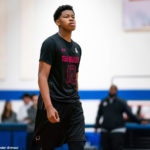 Monsanto is a shot maker, he has great confidence on the offensive end of the floor.  He is a legitimate 6-foot-5 wing who has the range beyond the three-point stripe. When he heats up he has the ability to go on a run to knock down five or six deep three pointers in a row no matter who is guarding him.