Kai Jones was one of the hottest prospects in the country during the month of July. Photo – Ty Freeman

One of the biggest stock risers from the summer, Jackson picked up numerous offers during the month of July. Jackson is a true shooting guard with a confident stroke and range to the arc off the catch or dibble. He runs the outside lane on the break and if the transition defense falls asleep he rarely misses open shots when his feet are set. In addition, he has good ball skills which will allow him to handle the ball in a pinch and he has the bounce to finish in the paint area.

Jones is a long and athletic post with good mobility and a matching skill set. He runs the floor very well, changes direction effortlessly, and score inside/out. He is effective in transition, beating most bigs rim to rim where he can finish out ahead of the pack. He secures rebounds above traffic, blocks a fair amount of shots, and has a high defensive upside thanks to his size, length, and mobility. 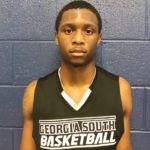 Jordan “Snow” Brown is a good guard that can create for himself without a doubt at 5’8. He faced quality competition over the summer & played at a consistent level most games. He’s a reliable shooter from the long range & savvy enough off the bounce to break down defenses and get paint touches. Versus EYBL team in AOT, Brown went on a personal 11-0 run leading a come-back effort late in the 2ndhalf for his Georgia South ball club to finish with a team high 25 points. His ability to score isn’t a problem most games, but he must become a better floor general. Choosing points in the game to attack and when to look to get other teammates going will be something that comes as he game matures. He could become a very good steal for some schools looking to add depth at the point guard position. He will be on a talented Westover High roster this year looking to make a deep run at the State title, so he has a chance to improve this season and pick up more offers.

AJ Jackson may be the best athlete in the state of Georgia that the 2019 class has to offer. He’s a nice 6’2 off ball guard that plays at a high level in the open floor and in space. Jackson showed plenty of highlight dunks from windmills to tomahawks in transition all summer wowing crowds and sidelines filled with coaches. He gets into the lane and finishes around bigs with acrobatic layups in the half court and will give you an occasional three. Jackson is a tough defender and most impressively, the ultimate competitor. No matter the score, Jackson plays with 100% energy and effort. I could see him being a big impact for  a loaded Westover team primed to make a State title run this year. 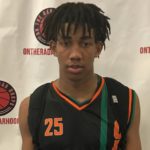 Watson was a quiet role guy for the Georgia Canes this past spring, but by the end of the summer he became one of their main contributors on both ends of the ball. At 6’7, maybe 6’8 Watson can do a bunch of things on the floor to help a team. He can rebound on the defensive end and initiate the break to pitch the ball ahead, although he must work on his decision making, the athleticism and skill are already there. All summer long he dominated the paint with countless monster dunks over defenders rocking the rim. He can hit the short jumper, but most work to make it more consistent. Watson has a chance to sneak into a low major program as an undersized 4 who can bring energy on both sides of the ball and excel as a shot blocker. With polishing Watson could potentially become a pick & pop 4 who could stretch defenses up to 17 feet, along with his rebounding ability. This will be a big senior season for him as he looks to improve and collect offers.

As a 2022 who hasn’t seen a day of high school yet, Zocko Littleton Jr. is already playing up 17U with the Georgia Canes and producing. Zocko looks comfortable out on the perimeter as well the transition with bigger faster athletes already. He displayed an IQ higher than the average rising freshman along with a solid fundamental skillset from passing to footwork. At 6’1 Littleton already is a good shooter from outside the arc, hitting multiple 3’s game after game. He can shoot teams out of a zone or make defenses pay for helping off too much with his quick release. In the coming years, I expect to see Littleton emerge as one of the top shooters in his class & evolve into an all-around high IQ lead guard with the ability to shoot the ball similar to Auburn starting point guard Jared Harper. He will be a freshman at South Cobb where he should see minutes on the varsity roster looking to surprise some people this upcoming season.

Littleton connected on (5) three pointers in a win for the Georgia Canes @CanesGa pic.twitter.com/k97r3TpMVw

Zyrice Scott may be one of the most underrated lead guards Georgia has in the 2019 class. Scott is a do it all lead guard who can facilitate and distribute with the best of them and a proven winner. He can be turnover prone at times, but gives 100% effort every play on both ends. Zyrice can shoot the open 3 ball and find teammates off penetration consistently. He played against quality guards all summer and never shied away from the moment. Scott can get to the midrange to stop and rise for easy jumpers and finish around the rim. Becoming more of a presence in the game from start to finish has to be his focal point going into the high school season, as he can go quiet at times in the flow of the game. If he can put pressure on teams in the paint, protect the ball, and knock in open shots from start to finish of a game, schools will come calling for sure. He holds a Columbus State offer right now but looks to add more going into his senior season on a 63-0 Upson Lee team coming off back to back State championships.

Devin Butts has always been touted as a good shooter from the middle Georgia area, but this summer he became arguably the best shooter in the State of Georgia 2019 has to offer. Butts had games on the circuit knocking in 9 three pointers impressing the likes of Houston, FGCU,VCU, Georgia State and plenty more as he racked up offer after offer these live periods. At the next level Butts will look to be a sniper on the wing who can stretch the floor for defenses and open up driving lanes. He can make plays off the dribble and get to his midrange jumper over smaller defenders or finish at the rim. His college decision will be an interesting one.