Let’s go with 5 more from the Peach State in Part 2 (high school in parentheses).

As good and legit as his Grovetown teammates are it’s been useful to see Reid apart from the whole and able to showcase the full gamut of what he has at his disposal, with a 16U Dickerson bunch that can make a case for top 2024 independent club in the state he has taken the offensive end by storm using an array of face-up possibilities to shake defenders while also at 6-7 being able to take smaller defenders down to the block for damage there, it’s not a slight at all to his superb and skilled 2023 Warriors mates to say he may very well be the most purely talented prospect of the whole immensely talented bunch, just added KSU coming off this weekend’s team camp and his offer list will begin to grow both this month and after Dickerson likely gets their head to head shot at the shoe teams in early July’s Battle for GA. 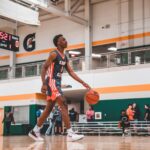 A recent addition to Kell from Walker there has been perhaps no point guard in the 2024 class who has done more this spring to vault his name onto recruiting radars than Brown, playing on the 16U 3SSB Game Elite team that features Peyton Marshall, Jeremiah Wilkinson, Josh Hill and 2025 Caleb Holt among others this group has naturally been a magnet for eyeballs of evaluators and coaches alike, combining elite explosion up and back and off the deck together with devastating multi-level scoring ability means even the top defenders in the country have had trouble with Brown’s dynamic ability, wise of home state Mercer and KSU to get in early but this list will quickly be adding high major D1’s in the near future. 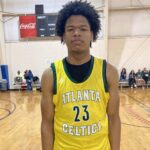 As a youth star was among the best young shooting prospects coming up and put that to good use playing varsity as a freshman with established older players, last regular season with the Rams we saw the expansion of his full-court scoring game even with seniors Tyrese Elliott and Caleb Blackwell in charge of the ball, now as his body has continued to mature to a point where the power game has been added to the finesse it’s easy to see why high major D1’s have begun to get in on the stout guard, has the look of a college guard both physically and with the mind of a baller who just sees the game at an advanced level. 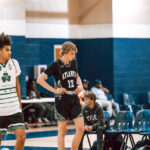 Utilized the live periods precisely as they are designed to be done as playing up on what is usually a highly competitive and skilled T-Wolves 17U bunch he took the April periods by storm posting some monster numbers against top-flight competition, the excitement surrounding him was palpable entering the spring off of a regular season with a really good West team that caught the eye of many regulars on the local scene, those unfamiliar with his skillset often show up at courts to watch him and marvel at the explosive lift off the deck and then are equally impressed with how well he shoots it from 22 feet and beyond, a long 6-5 means as he adds more brawn to the frame he won’t be outmatched at all defensively, an easy addition to this list. 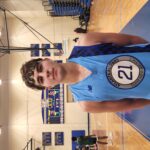 Grateful to have had the All-Stars play with us in April to see Rogers and others as they generally play a wide-ranging and highly competitive slate as one of the state’s top independent programs, Rogers has advanced so far in just about every category it really has been satisfying to have tracked it the last 2 years, as a rising sophomore he was already one of the best rim-protectors and post defenders in the age group but has now brought his level up on offense to the top of that list as well, improved his handle in the face-up game as well as showing off a much more consistent 3-pt shooting package that has naturally caught the eye of D1 schools at a legit 6-9 with a lot more muscle on the frame.