NORCROSS, GA – Back to the home of the defending 7A champions we went, and after an incredible turnout at Breakout two weeks earlier, OTR welcomed in juniors and seniors (and some 2025’s) for their chance to play before coaches and the best evaluators in the state.

Some big names were noticeable, other newer names emerged or put a stamp on their ongoing upward trajectory.

Here were some Impression-Makers, all 2024’s: 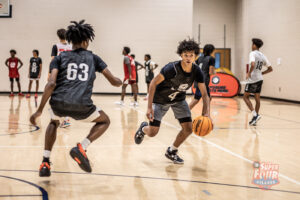 Such a mix of sound fundamentals and explosiveness highlights what makes Hopkins special, he can wait you out and find a good shot or pour on the jets and get by you, the great size at 6-5 for the lead spot means a lot of mismatches and he’s shown an ability to take his game down lower to maximize his height advantage in this cases, the distribution and floor leadership is top shelf in a deep ’24 class laden with top PG’s, Georgia Tech and Kennesaw St have offered and that list is going to expand after what’s expected to be a big junior season. 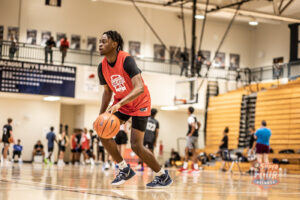 With his Georgia Jayhawks teammates really put themselves on the map with a strong spring and summer campaign, Isaac (along with rising Union Grove stud forward Nile King) were at the forefront and last Saturday Isaac showed off much of what made him one of the more versatile guys I saw all travel season, plays much bigger than his 6-4 both as a defender where he showed off some shot-blocking and as a matchup problem for smaller and less physical point guards, he can handle the ball as a 1 or be a real physical downhill force from the wing, shoots it well but does more of his damage as an ace defender and paint-attacker, was among the best overall I saw on the day and is yet another South side sleeper.

My eyes seemingly always gravitate to Bilal when he’s on the floor as he tends to make things look easy even when he’s dropping dimes on multiple defenders, there were moments at Super 64 where myself and a few others turned to each other and said he was the most naturally gifted player there taking away size from the discussion, that ease of movement and seamless decision-making can seem almost casual but what’s he’s really doing is showing off a natural acumen that few players in the ATL-Metro can boast, far more athletic than he appears until he’s off the deck or blowing by you it’s been my contention for 2 years now that he would rise to a top 10-type player status in the class and nothing has changed that assessment for me. 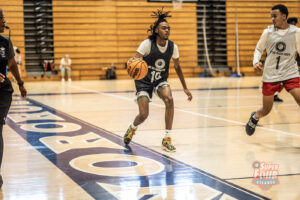 Roux caught our eye at OTR’s June Team Camp at NextPlay 360 and I had seen some intriguing signals earlier in his Mustang career as well, he’ll be among the main guys for MHS this winter and seems more than ready for the mantle as he was aggressive looking for his offense particularly using the bounce to create space for what is a nice perimeter game, he’s tough too getting to the hole and has really keen instincts on D, seems bigger out there than 6-2 and is trending upward for sure. 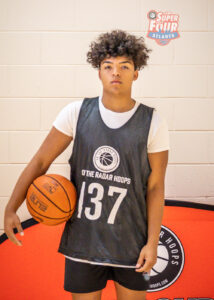 With his move to NCCS the ball lands squarely in his hands as the primary ballhandler and it’s been a thought of mine for some time that that’s where belongs, love the confidence and ability to use that to excite the players around him, that moxie is backed up by a modern-day scoring PG package that combines enough physicality to be a threat at the rim together with some real knockdown jump-shooting, spirited defender and after a big summer as well with Georgia Legacy I foresee big things coming for him over in Kennesaw. 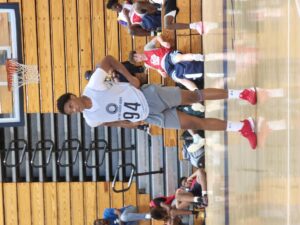 After watching 2025 Greenforest teammate Daniel Daramola have such a good day at Breakout it’s downright scary seeing that Favour is also available in the Eagles frontcourt, 2023’s Gai Chol and DK Manyiel will be gone after this winter but the likes of Daramola and Favour retunting will surely ease the transition, I liked how he got up and down the floor putting himself in spots around the basket where he could do damage, he was active on the glass at both ends and I think there’s still a lot more in the offensive tank that he hasn’t unleashed yet.