DULUTH, Ga., – The On the Radar Hoops team put together one of the Atlanta’s best showcase events over the Thanksgiving break. This one day event featured five great games of action, which will help serve each team as a springboard into their region schedules. With multiple college coaches on hand and several media sites in the building, teams and players were given the utmost exposure in a city high school event. Here is a rundown of the showcase’s top performers. 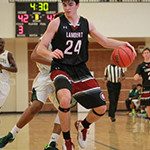 The sharp shooter can be described as a prototypical stretch 4-man. He showed those shooting skills on Saturday afternoon en route to a 19 point effort and a win. The 6-foo-7 forward hit critical jumpers in both both halves to help coach Scott Bracco’s team to a win. His length, skill and shooting touch helped him sign to play with Navy next year. 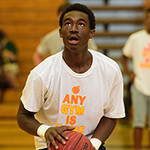 There is a lot to like about the 6-2 guard for the Rams. He is a high energy back court player that brings IT on both ends of the floor. His ability to slash to the rim or even finish above it gives his team excitement each game. His 22 points in a win over East Jackson helped propel coach Geoffrey Pierce’s team to victory in the showcase’s 3:00 pm game slot. Expect much of this contribution from Willis once the Rams hit Region 8-AAAAAA play. 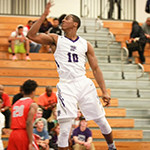 Diaz showed his ability score efficiently in a win over Archer on his home court. His 21 points came off of pull-up jumpers and breakaway dunks. Standing a 6-3, the wing is proving to be a go-to player for coach Eddie Hood and the Wildcats. Just the night before Diaz poured in 29 in a one point loss to Holy Innocents. This type of consistency should have Diaz in the conversation for All-Region consideration in the post season. 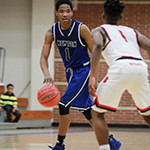 While Simms’ back court teammates (Januad Notae and Ashton Hagans) came in with much of the publicity, it was Simms who came up with the timely buckets in a win over Berkmar. The 6-1 senior hit jumpers and finished at the rim at just the right time to ensure a victory for coach Rick Rasmussen’s squad.  Then to make sure the game was sealed, Simms hit critical free throws in the games final seconds. Newton will be in good shape the rest of the year with this type of contribution from the senior guard. 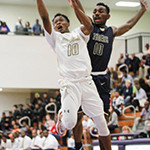 Easily one of the best unsigned seniors in Gwinnett County, St. Hilaire showed why on Saturday evening. He went toe to toe with UNC signee Brandon Robinson from Douglas County and finished with 29 points in the win. His ability to penetrate and score off of the move gives him an added dimension as a point guard. However, do not think of the 6-2 point guard as a score first (or score only) type of player. He faciliated the action and helped Kevon Tucker score 22. Expect St. Hilaire and Tucker to trade top scoring nights all year long. And do not expect St. Hilaire to be without a school destination once the high school season finishes! 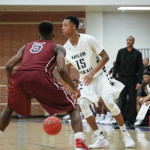 James checks in as the youngest player on the list, but he played like a mature veteran in the day’s premier match-up. His critical 3-point jumpers helped the Generals run past Pebblebrook on Saturday evening. The 6-5 guard has the skills to be a lead handler, however he can play off of the ball too and score if needed. Although James just joined Kim Rivers program this year, he played with the experience of a player that had been with the Generals for years. Mark James down as a stock-riser from the event and player that we expect to hear much more from on the summer circuit. 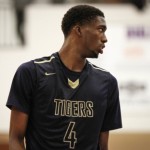 UNC signee Brandon Robinson of Douglas County had one of the biggest nights at the showcase. Albeit in a loss, he scored 36 points and put his team on his shoulders for most of the second half. His focus and aggression at scoring the basketball was as good as we have seen to date.

Pebblebrook’s addition of  class of 2017 JJ Smith will pay dividends later this season. The 6-6 small forward is clearly one of the most athletic players in the state of Georgia. He is one of the fast-break dunkers that we have seen. As good as he is in transition, he can be equally impactful on the defensive end.

Berkmar senior guard Josh Faulkner turned in a solid performance. Scoring 20 points in a close loss to Newton, Faulkner helped keep his team close throughout the night. Coach Greg Phillips has great depth at the guard position heading into region play this week. 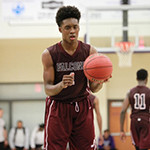 Pebblebrook’s Collin Sexton continues to prove that he is one of the best perimeter scorer’s in the class of 2017. He finds ways to get score on the move in the lane. His jumper is consistent. He is a perfect compliment to Jared Harper in coach George Washington’s back court. Put Sexton on the early #ATLTipOffWatch list for the All-Metro team.

Newton’s JD Notae showed why a number of college coaches are tracking closely this year. His 11 points in a win over Berkmar may not be the highlight of the year, but his buckets came at timely moments. Expect him to be a catalyst for his team’s success.