Reggie Luis Jr. made a name for himself at the Power 24 last weekend.

Atlanta, Ga – The COVID-19 pandemic is still in effect but things have subsided enough for travel teams to get in the gym and showcase their talents the last few weeks. On the Radar Hoops’ “Power 24” was the biggest showcase of the year thus far and the competition that was on display from teams all over the southeast region of the country was indicative of that. Georgia as well as Alabama, Florida, Louisiana, and Tennessee were just some of the states represented over a two-day span and with games being streamed online, spectators from all over the country witnessed the talent at hand. With safety measures in place, the weekend felt as if a sense of normalcy was restored and as a result scholarships have and will be earned for those who enjoyed solid play. Below are several prospects I felt enjoyed great weekends and should see their recruitment pick-up because of it: 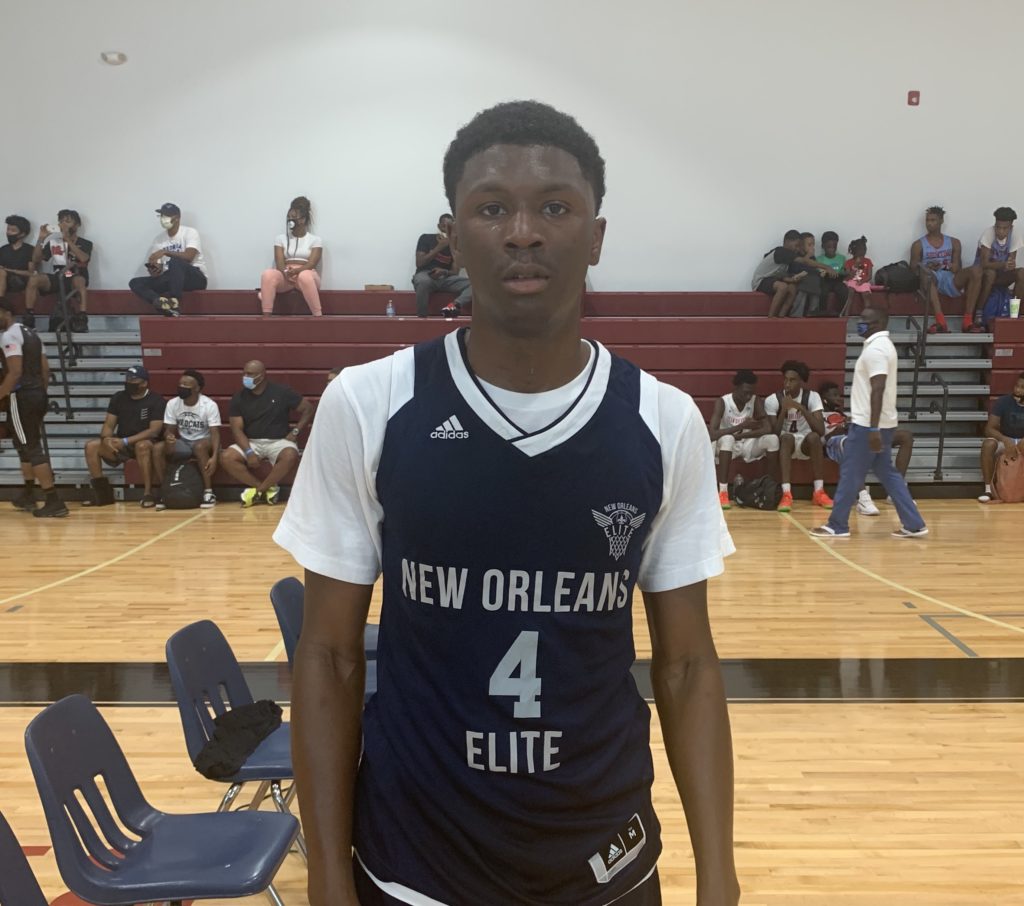 Carter was my favorite prospect at Power 24 because of his consistent production in different styles of games. In transition, he made great decisions when finding teammates and in the half court he was able to break down good defenders and get into the lane to make plays. At 6’3” he rebounded well from his guard position and often times was the initiator of fast breaks for New Orleans Elite. What set Carter apart from most guards over the weekend was his lay-up making ability on both sides of the rim. He was able to finish amongst legitimate big men and as the weekend went on, his shot making from the mid-range and three-point area got better which made him an even tougher cover for opposing defenses. Already holding an offer from Southeastern Louisiana and recently picking up another from Southern University, I would expect more Division I head coaches to inquire about the rising senior from East Ascension.

Add Tucker to the list of versatile forwards at Power 24. In one of the most competitive match-ups of the weekend, his ability to shoot the basketball and stretch the defense was a big reason why Team GA Select All-Stars were able to pull away from Team Breakdown. In that high-profile game which featured several athletic prospects, making shots from the perimeter was a rarity but Tucker gave his teammates more of an opportunity to drive the lane and get to the rim in the second half. At 6’7”, Tucker can guard multiple positions defensively and made an impact on the defensive glass for his team as well. The senior from Cherokee high school used a nice face up game once he gained position on defenders in the high post and wasn’t afraid to put the ball on the floor and get to the basket from that same area. Tucker has received a number of Division I offers over the past year with his most recent coming from Furman University just last week.

Having seen Stephens for the first time one year ago, I can undoubtedly say that his game has matured even more over the past twelve months. He did most of the ball handling for Team Forrest and did a good job of taking care of the basketball all weekend. He has a very solid frame and used it to absorb contact at the rim as well as get to the free throw line. The senior from Woodward Academy can play the point guard spot but his shot making ability is what takes his game to another level. He can score points in bunches because of his streaky shooting and in a Saturday morning match-up at Power 24 he was able to pour in eight of his teams first ten points in the first four minutes to give them an early boost offensively. His role for the defending state champion War Eagles will likely increase after losing a talented senior class and I believe his talent will be on full display for college coaches to see in his final high school campaign.

I love the upside from this 6’5” guard out of St. Anne-Pacelli high school. His length and athleticism will allow him to defend his position at the next level and offensively it will make the game easier for him in all facets. He has a lot of lift on a very smooth jump shot which he connected on all weekend and his array of moves when the ball was in his hands allowed him to create space to hit shots from all levels. In transition, when Harper isn’t playing above the rim he can still be effective in the paint as he was able to maneuver his body at the rim for crafty lay-up finishes over and around shot blocking defenders. Fresh off an offer from Miles College and the University of Texas at the Permian Basin, I believe this is another prospect who should she more offers roll in if he continues to play at the level he did at Power 24. 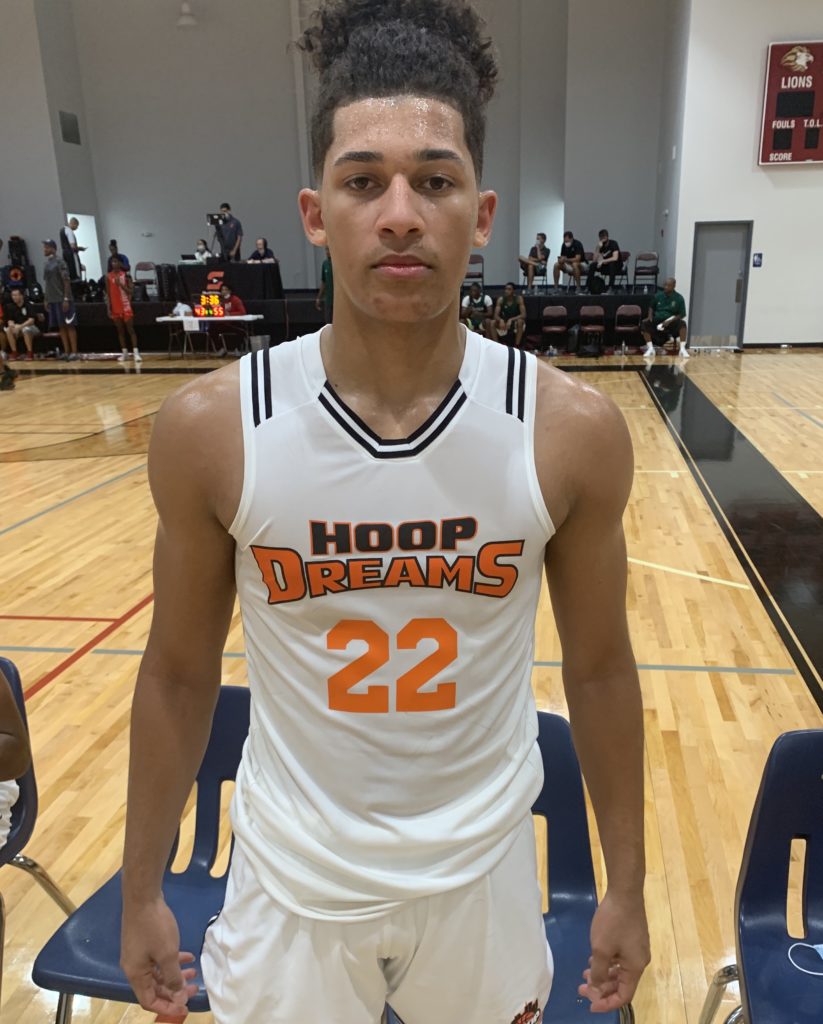 Franklin was the number one option for his team offensively all weekend at Power 24 and he delivered in more ways than one. The scoring point guard from Elizabethtown high school has a very smooth skillset and allows the game to come him when filling up the stat sheet, which was evident in a 25-point performance in the night cap of day one. He used a tight handle and deceptive change of pace to get to his spots on the floor in both matchups I saw him in. Franklin exceled when finishing in transition, looked good shooting the ball from three and wasn’t afraid to get into the paint for tough finishes in the half court. His latest Division I offer came a year ago from the University of Illinois at Chicago but I believe if he continues to play this summer more opportunities should be in store for him at the next level. 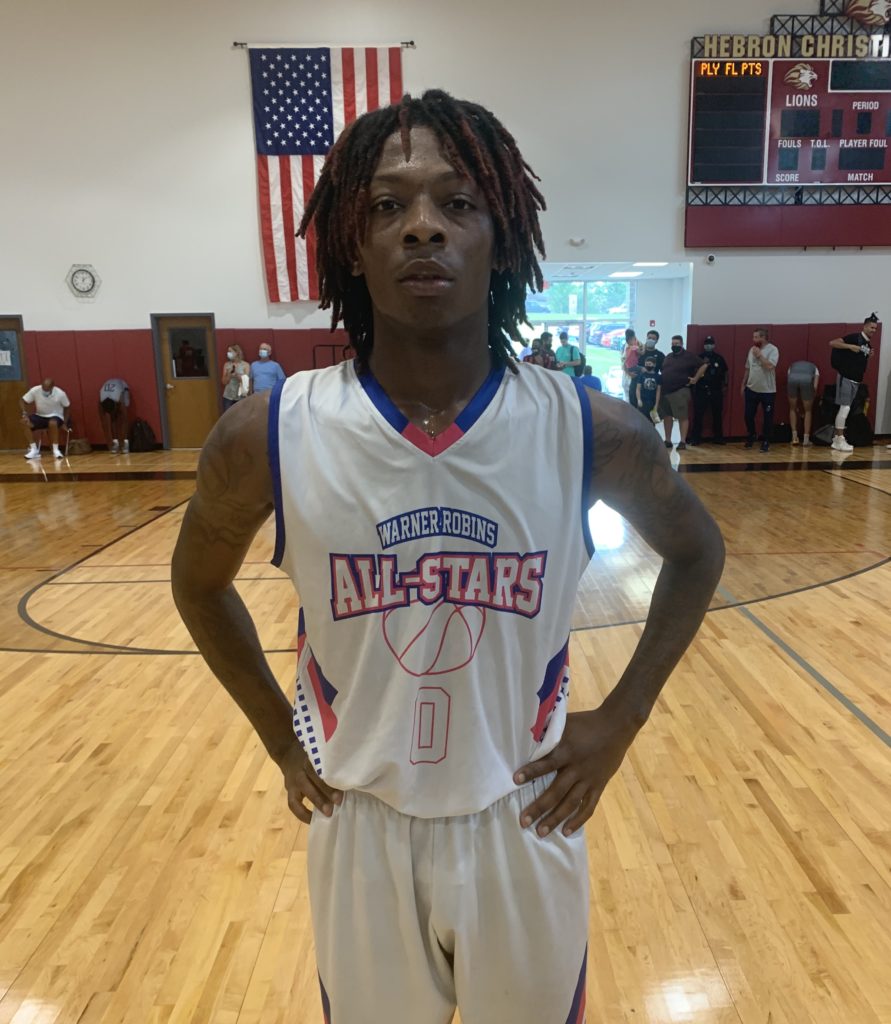 If you’re looking for a tough nose player that can get it done from anywhere on the floor offensively, look no further than the rising senior out of Warner Robins high school. At 6’3” Jones has good perimeter skills and showed that in his ability to knock down shots from three-point range and handle the basketball out on the wing but most of his damage was done 15 feet and closer. Jones is the type of player you plug and play at the free throw when facing a zone defense as he’s able to knock down floaters, hit the mid-range jumper, and get the ball to the rim where he is an impressive lay-up maker. He rebounds, runs the floor, locks in defensively and simply makes game winning plays throughout the course of games which makes him hard to take off the floor. I love his game and I believe his game can translate to the next level because of that versatility.

Luis Jr. was a swiss army knife for SOH Elite at Power 24 and whenever you looked up, he was normally making a play for his team on both ends of the floor. He is a 6’5” guard that looked very comfortable making plays for others in the half court from the top of the key. He can initiate offense and uses his length very nicely to turn defense into offense and ultimately finish at the rim. Luis. Jr. can rebound the basketball, create his own shot off the bounce and has some finesse in his game when passing and finishing in transition. There’s a lot to love about his game and his final campaign at Columbus high school should bring college coaches in regarding his recruitment.

The Liv-On Fluer De Lis 17U squad had several talented underclassmen on its roster but the play of this rising senior out of Holy Savior Menard cannot go unnoticed. He is a solid 6’8” 230lbs but has great and feet on the low block and can surprise many with his athleticism down low as well. Dishmond has a nice jump hook once he’s gained position and had several impressive up and under finishes against shot blocking defenders. He looks good getting up and down the floor and he can handle hot passes in the pick and roll game with guards. Dishmond is a high percentage shooter on the offensive end and an enforcer on the defensive end. There’s a lot to like about his game and that was on full display at Power 24.