MILTON AND LAWRENCEVILLE, GA – We’re breaking down our region coverage in 2-day blocks, starting with my opening trips to Cambridge HS and Discovery HS Saturday and Monday. 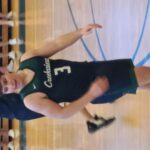 GRIZZLIES NOTES: The 5-7 Latimer put on a stunning 2nd half performance in almost singlehandedly holding off a Bears rally, showing off a hot hand from 3 and a fearless attack-plan at the basket. The senior backcourt of PG Trent Jackson and SG Drew Vajda were solid as well in what was turned out to be the 2nd to last game of their HS-careers.

BEARS NOTES: Sophomore guard Owen Edwards will be the centerpiece for CHS to build around moving forward, and I like his size and outside-in capabilities, as he was aggressive to the basket, showed nice touch from range, and at around 6-4 can guard multiple spots. 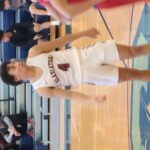 GLADIATORS NOTES: Ekoue-bla was all over the place at both ends, getting key buckets for his team while working his tail off at the other end to hold down explosive 2024 Riverwood guard Karris Bilal. Seniors Dillon Fullwood up front, wing McRae Ball and spunky junior guard Ethan Wainer were key contributors to a nice team effort by JCHS.

RAIDERS NOTES: The box score shows the 6-3 Bilal notching 29 points, hardly being held down in most cases, but the effort by Johns Creek was superb against who is clearly one of the top young scorers in the state and a soon-to-be nationally recognized, high-level prospect. The Raiders are young, and feature some intriguing pieces coming back alongside Bilal in good-looking freshman guard Jalen Leonard and 6-5 sophomore wing Jaeger Ouanounou among others. 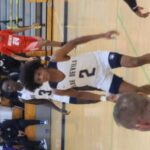 BLUE DEVILS NOTES: Senior 6-7 wing Jerry Deng has been looking sleek and confident both with his pretty stroke and work around the basket, and he was actually the high scorer with 26 to go with a slew of rebounds. Johnson was simply terrific across the spectrum in leading his group past an athletic and defensively-superb Tiger bunch. It looks to me NHS has settled in after the roster turnover of earlier in the season, and with the ball firmly in the super-skilled and nationally-ranked hands Johnson these Blue Devils have plenty in the tank for a deep playoff run.

TIGERS NOTES: This was the Damoni Harrison we saw terrorize Showcases in the summer and fall, as after the team shook off early jitters the 6-5 senior was the catalyst in getting them going and finished with a team-high 20 points with six 3’s. I believed it in the preseason and still do, the way this team plays defense, and with other veteran scoring options besides Harrison (6 other key seniors contributors), that kind of experience is going to be seriously troublesome for 7A bracket opponents. 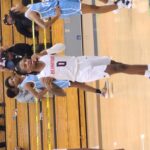 PATRIOTS NOTES: Like several other 7A squads right now, the Pats are clicking on all cylinders and looked the part of a team primed for another run to the finals. Rideout was sharp and precise in his decision-making and with the J, and the senior gives this team some critical stability at the helm to augment their frightening athletic dimensions. BHS’s first 7 guys are as stout as anyone in the state.

MEADOWCREEK NOTES: Eddie Hendricks was not in uniform, and that’s a tough loss for the Mustangs to offset, but they showed grit in spurts behind the play of senior SG Dennis Sturdivant (14 pts thru 3 qtrs) and rapidly-rising junior PG Keishawn Hampton.