WOODSTOCK AND SUGAR HILL, GA – Two more double-header evenings, both in 6A, a semifinal Thursday at Creekview and the finals & consolation at Lanier on Saturday. 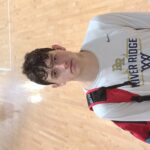 KNIGHTS NOTES: Guards David Hansraj and Trey Hopf took the early lead, combining for 14 first-half points before the senior bigs duo of Pierce and Jared Russo began to assert against the smaller Cougars over the last 16 minutes. RRHS has gradually during their superb season run made Pierce and Russo the key focal points nearly every time down the floor, and that will again serve them well in a 6A bracket they’re perfectly capable of doing deep damage in.

COUGARS NOTES: Glad to see this group of Hooch seniors make the states, they have been a part of a program that has risen to great heights with a state title two years ago and has helped to lay a foundation moving forward. Kudos to the accomplishments of Tomiwa Adetosoye, Gil Matondo and Avi Haritsa. 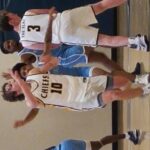 CHIEFS NOTES: Keener was clutch and downright unstoppable in spurts as even a team as good defensively as Centennial had a hard time staying in front of him or staying close enough to contest his shot. He has been for my money one of the best senior guards in the state since the calendar turned to 2022. This team emerged from this performance (and the eventual Region title win!) as a serious contender for Macon on nights when they are playing this well.

KNIGHTS NOTES: Not Centennial’s day, but the bigs combo of Abdulh Diaby and Wade Kahl (13 pts apiece) was at times excellent, and showed how big a matchup problem the two can be with Kahl using his deeper shooting range more effectively and Diaby an athletic bundle to deal with in close. The way this team can defend, with these two big guys, and smooth junior guard Mansir Williamson always capable of a monster performance, not a team you’ll want to see on your side of the 6A bracket. 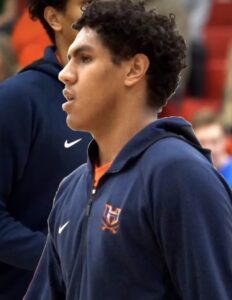 RAIDERS NOTES: When I first saw Garcia back in early January, Garcia was just getting his legs as part of the rotation. Now fully immersed as the all-doing, go-to guy for HCHS, he was as impressive as his reputation before arriving warranted. A top 2023 heading into this summer and into next fall, he has all the tools and at his size the way he can face-up, handle the ball, distribute like a PG, and score creatively around the rim, it’s as devastating for defenses as it is fun to watch. As far as the 6A bracket goes, senior guards Malachi Dolley and Mekhi Mawdesley (16 pts) will have a ton to say about how deep they go as well.

BULLDOGGS NOTES: Love the backcourt of senior Tim Loud and junior Jeremiah Holloway, as Loud can be so explosive at times and can go on scoring runs that can really carry them, while Holloway is a sleeping giant of a 2023 prospect who like Garcia is special and has a summer ahead of him where he will be hard to miss on the grassroots trail. 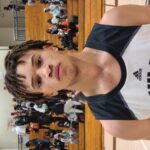 GENERALS NOTES: Slater hit 4 3’s on the night, and they came at key junctures, as the senior was at the forefront of his fellow 2022 classmates. This fun group of veterans who can really defend as a team willed their way past a good Buford team, holding down the Wolves stars most of the night and capturing their first Region crown since 2016. Trevon Payton, DJ Leak, Isaiah Bertie and Zaron Jackson are yet more of that senior contingent and with that kind of leadership and moxie it will be fascinating to see how far they can take things in 6A.

WOLVES NOTES: Buford too is a veteran team with 2 seniors and 3 experienced juniors starting, and 2022 leaders Alahn Sumler and Jaylon Taylor are more than capable of having the kind of game-changing night where they can lead the Wolves deep into the 6A bracket. Too often underscored is the steady play of 2023 guard Malachi Brown, so solid as a lead man at both ends and whose stock has nowhere to go but up from here.