WOODSTOCK, GA – Relentless Hoops continues to put on high-level camps and showcases around the ATL-Metro, and we had a chance to stop by for Day 1 at Etowah HS.

Here are 5 names to know from the first five games on the main court: 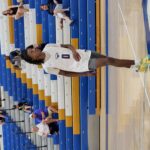 2023s Brandon Rechsteiner and Mason Etter most often draw consistent raves for their play and rightfully so, but it was the explosive Weaver who showed off some of his tantalizing talents on this day, can really fly both on the floor with speed and above the rim with vertical and by my count had 4 dunks in 2 games, he’s ideal for this lineup coming off the wing in transition or in the halfcourt feeding off Rechsteiner’s dynamic abilities, will be fun to watch develop for a team that should be strong again in ’22-23 and it will be his time to shine the year after.

Big fan of this Marist group that will be a challenger in 6A despite the jump, there are scoring options abound up and down the lineup as 6-6 SG Ben Ritger is a dangerous wing bomber, forwards Garrett Ledford and Luke Waugh play tough and smart, and PG Jesse Gaynes makes it all go, Harpring has a possible college football future but plays a pretty smooth style on the basketball court and can call on that gridiron physicality when needed, but it’s the shooting and ability to dissect defense that usually has him standing out most days. 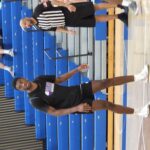 Another squad on hand with a deep stable of offensive options as PG Isaac Martin is one of the best in the ATL-Metro, wings Zak Thomas, Jack Thomas and Jaydon Cole give them tons of scoring versatility, and newly arrived 6-10 forward William Jobe is generating a ton of D1 interest with his stretch-4 skillset, Hoover however has made a significant leap in my estimation from physically gifted yet timid to full-on beast-mode for what will be his last season, that transformation has meant he is a much more willing gladiator taking on all sizes and bodies at both ends around the basket and using those enormous natural gifts now in a more complete forward package.

Could have easily been Kenny Southall in this spot as I love this backcourt together as a unit as much as I do the two as separate prospects, this MV team is looking awfully good with bigs Dennis Scott III (not playing), Keith Williams and newly arrived Xavier Shegog anchoring inside and add’l new arrivals Pace Bottoms and Sha’Yah Goba added to the wings, Patterson came on last year in place of Syncere Harris when he wasn’t in the lineup and showed off some of the intriguing skills that he can now put on full display with the ball his, he’s got good quickness off the bounce and has a nice stroke from distance, getting more consistent with his decision-making will be a key in drawing the kind of college attention his natural ability should garner.

This Buford team looks really strong to me and even with the move up to 7A I believe they are definite contenders as this group of 2023’s appears to have excellent chemistry following their star PG Malachi Brown (London Williams, David Burnett, Cam Kelly are some of the others notables in the class), Brown was on the sidelines this day but 2024 New Manchester-transfer Chase James-Robinson stepped in ably as he can really play, Carpenter has the look of the next star in Green and Gold as his comfort level for a young player immediately stood out and his multi-level and powerful scoring package is really sound and yet only in its early stages, an absolute must-watch name up in Wolves country.