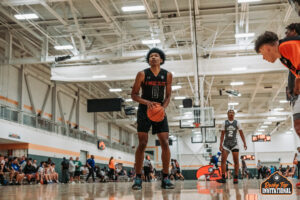 The 6’7″ power forward out of Knox Catholic, Deondrea Lindsey, captures you with size, and then makes big time plays seem effortless. Lindsey has already made a name for himself having picked up a couple D1 offers from Georgetown, Georgia Tech, and SMU. What makes Lindsey so fun to watch is watching his impact on the game, inside and outside the paint. Lindsey does very well positioning himself for missed shots on offense and really understands how to guard bigs defensively, and with his long wingspan is able to accumulate block shots. Lindsey also has quite a nice game on the outside, proving he can knock down 3-pointers with ease. I expect his recruitment to continually increase heading into the summer live period.

Just caught up w/ @Jr_OTRH about
2025 @deelindsey_0‘s play this weekend
Has really added to his skill set since last year, showing ability to put the ball on floor & step out to 3 to go along w/ already impactful play around the basket 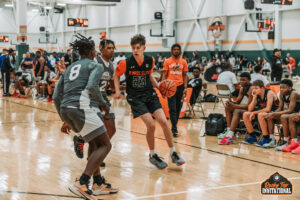 The 6’4″ shooting guard out of Sevier County High School, can absolutely light it up from the outside. Ownby is a terrific shooter and had several games with multiple 3-pointers. Ownby shoots at a very high clip and can get hot quick. Does really well finding open spots and has a quick release, but can also take players off the dribble and finishing through traffic. I expect Ownby’s stock to take off as he’s a very consistent and high IQ player.

The 6’8″ forward from Grayson High School is as smooth as they come for a big. Has very soft hands and great footwork around the rim. Taylor also does very well hitting the  3-pointer from the trail but with his great hand-eye coordination can catch on the move and finish inside. Has a great understanding of where to be for missed shots and uses his long body well, keeping the ball out of guard’s reach and taking it to the rim. Has D1 offers from North Carolina A&T, UGA, and UNCG. I expect that list to increase drastically going into the live period. 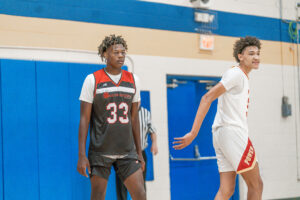 The 6’8″ power forward out of Charlton County High School, Elyiss Williams, is a player every D1 program should be tracking, and not just in football. Williams has several D1 offers for football, and I believe that list is going to grow in the same capacity for basketball. Williams was by far one of the most impressive new players I saw at the Rocky Top Invitational and as his game continues to grow, he will be a household name around the country. 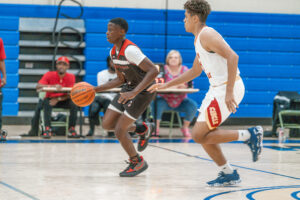 The 6′ shooting guard out of Charlton County High School lit it up at the Rocky Top Invitational. The 2025 shooting guard, Wright had multiple performances where he accumulated multiple 3-pointers at ease. Has a very smooth stroke and knocks down shots at a very high rate. A great shooter from south Georgia, I expect his stock to continue to rise as the South Georgia Elite continues to put teams on notice.