EMERSON, GA – LakePoint Sports was buzzing again after a short hiatus as they kicked off their RYZE Hoops Fall League Thursday night.

Each week I’m there I’ll try and spread myself around to see as many teams as I can in the 3 blocks, here are some notes on teams I caught on this opening evening:

KELL IS GOING TO BE JUST FINE 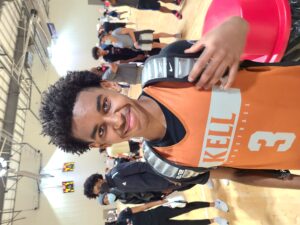 You don’t lose a player the caliber of a Scoot Henderson (off the to the G-League) and not feel the loss, but going back to June I have to admit I really like what Kell puts out there as they prep for the ’21-22 season. You can see in the play, particularly of their returning veterans, that each guy is taking it to another level to pick up for an obvious notable roster shift. Junior guard Parrish Johnson has always been an under-the-radar type with a lot of ability at both ends, and his coming-out party as a marquee guy of sorts is set to roll. He’s got good size to play either guard spot, really guards the ball (slowed down Brandon Rechsteiner during their comeback win over Etowah), and can shoot it well from multiple levels. He’s joined in their backcourt by super soph Jaylen Colon, who both at June team camps and for Game Elite Blue rapidly established himself as one of the best 2024 guards in the state. He’s a big-time lead guard prospect with Trae Young-esque range on his shot, is already a skilled floor leader, and like Johnson and all the Kell guys gets up into you on the defensive end. Up front, the Horns will be much bigger this year than last thanks to a couple of critical frontcourt transfers, as 6-8 senior Sahmir King and 6-11 sophomore Peyton Marshall enter to join returnees 6-3 senior Dylan Cambridge and 6-4 junior Aaron Smith. Cambridge and Smith both move inside and out as hybrid guard/forwards, but either way they work so hard on the glass and gain their offense through such effort it’s no surprise that those two may very well be the hidden keys to another deep playoff run. King looked really tough on the catch near the basket vs Etowah and has great feet and a keen nudge for holding off defenders, while Marshall is a wide load with intriguing potential who’s coming off a solid showing at the US Basketball Games a few weeks back and has time to marinate under the well-regarded Kell coaching staff.

ETOWAH WILL BE LIGHTING UP SCOREBOARDS 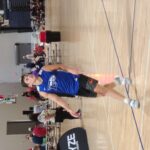 Kell stormed back for a 1-point win over the Eagles, but in Fall League while you always like a W, you’re looking for positives as your guys get in reps and prep for October full practices. This Etowah group like Kell looked poised, confident, and skilled during the June period and kept that rolling Thursday night even without two key seniors in Josh Hughes and Dajaun Devonish. Leading the charge yet again was junior PG Brandon Rechsteiner, who lit up the Horns for 17 pts in an electric 1st half performance, finishing with 24 on the game. As documented in my Cherokee County “Make The Trip” series, he’s showing off a full package at 6-0 tall with strength, ballhandling, shooting, and leadership that rightfully has him garnering more and more significant D1 attention. Fellow junior Mason Etter didn’t have his best stuff on the offensive end, but he was spending the majority of his time playing center and defending the rolling rotation of physical Kell bodies. That aspect of his game, defensive versatility at 6-5 and a willingness to do whatever it takes, is perhaps Etter’s most noteworthy quality as a next-level prospect. Missing those two key seniors meant senior SG Jonah Hamilton needed to get more aggressive, and he did just that knocking down a pair of 3’s and generally getting away from the arc and joining the fray more. Hamilton, together with rising sophomore SG Dimitri Angelakos, give Coach John Dasinger a pair of seriously dangerous arc-threats who can stretch things some for Hughes and Etter to do their work in the mid-range and on the block. Keep an eye as well on 6-2 2025 Aiden Weaver, a deep stable of talent may keep him from seeing monster minutes, but the freshman’s a good-looking athlete with some upside in a 2-guard attack role. 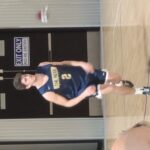 The 2022 class at River Ridge has been filled with such promise for the last 2 years, and while the landscape of AAU basketball and its evaluation can be unforgiving and sometimes downright incorrect, this group has emerged better for it as they lead a Knights bunch that has legit eyes on a deep state playoff run next winter. In dispatching Pope in Week 1, the trio of Braden Pierce, Grant Portera and Jared Russo looked the part of a veteran triumvirate that has been through adversity and are seeing the fruits of those labors. The 6-11 Pierce has drawn SEC-level interest after a 15-month run converting himself from a D1 baseball prospect to a legit D1 frontcourt prospect. In addition to ending the 1st half with a long 3-ball, a new piece of his arsenal, Pierce looks more and more assertive and skilled off the catch in close and has been a quiet but lethal assassin protecting the rim for some time now. Russo at 6-9 and looking stronger than ever keeps bringing the fight and has moments each time I see him where he grasps the great physical gifts at his disposal and owns the moment. Now entrenched as the man for the Knights whenever he chooses to seek the attack, Portera can be a monster breakout with his combo of uber-athleticism at 6-3 and growing confidence in using those tools not just to sky over folks but as a basketball player who seeks the finish and not the internet highlight. Junior guard David Hansraj left early with a back strain, but he is a massive key for Coach Aaron Darling, and had his 3-pt stroke going before exiting. Every ship needs a captain, and senior PG Trey Hopf may be diminutive next to his taller classmates, but he has a little flair to his game to go with good instincts as a distributor.

OTHER TOP PLAYERS FROM THE EVENING:

16 easy-looking points with 10 mins still to go for @PCPatriotsports Elijah Fisher, coming off a broken wrist his stout lower half looks plenty healthy & explosive and the 5-11 2023 guard can blow-by and gets to the rack with serious gusto@OntheRadarHoops@OTRHoops@RYZEHoops pic.twitter.com/mrQOjTNotj

Cameron James, 6-4, SG, Chattahoochee, 2024 > All the measurables and ability to become a top prospect

Yuta Yamamoto, 5-9, PG, Chattahoochee, 2024 > Establishing himself as one of the best under 6-footers in the ATL-Metro

Tomiwa Adetosoye is on the sideline tonight, so extended looks with the ball for two exciting @HoochHoops 2024s in 6-4 wing Cameron James (left) and PG Yuta Yamamoto, James is a big-time slasher with range & Yamamoto controls the ball & has great vision@OntheRadarHoops pic.twitter.com/n3xfqJlKd3