WHAT HAPPENED: Shiloh W 63-44 – Behind the superb play of Tim Loud early, the Bulldoggs had the hosts reeling by halftime down 1, but behind airtight defense and the shooting of Trevon Payton (pictured above) the Generals stormed back and kept their undefeated run going (18-0 as of this posting).

SHILOH STANDOUTS: The recent Limestone University-signee Payton showed off his versatile skillset as they came out from the break with a 20-7 3rd period that was the difference. At 6-5 with a stroke made to travel, Payton really impressed and exudes the kind of poise and experience you’d expect from a team filled with veterans. After checking in on the Generals at the TOC back in December, sitting courtside they were much more impressive than even then. A main rotation that starts 4 seniors and a junior, and then has 3 more seniors and a talented freshman coming off the bench, combined with a defensive system designed to rattle you and make you uncomfortable, and it’s the kind of recipe that send teams deep into the playoffs and possibly even toward hanging a banner. 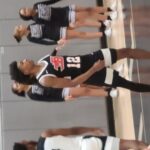 WINDER-BARROW STANDOUTS: Loud was unconscious in the first half with 15 pts, taking what the defense gave him often as far as 22 feet+. He’s been fun to watch as he combines explosiveness off the deck with a now refined stroke from distance and can play either guard spot at 6-1. Backcourt running mate 2023 Jeremiah Holloway was off his game a bit, and then was bottled up in the last 16 minutes by the inspired Generals D, but he too has been putting up consistently solid numbers all year and is another guard in that junior class that bears serious watching.

KEEP AN EYE ON Isaiah Bertie >> The 6-8 Shiloh big man was super active around the basket at both ends, and he gives this otherwise guard-heavy group some much-needed interior juice. With Payton, DJ Leak, Seryl Slater, Emmanual Okogie, Zaron Jackson and Duntarius Williams all highly capable backcourt contributors, when push comes to shove in the 7A bracket these Generals will need some rim protection and second-chance buckets from the athletic senior.

WHAT HAPPENED: Walker W 56-44 – An impressive bounce-back road win for a Walker group coming off a couple of tight losses to solid A-Private’s Darlington and Christian Heritage. Saint Francis shows good fight, it’s a distinguished program, has some young and underclass pieces with which to build, and is still 7-1 in Region as of this posting and very much in that mix, but couldn’t quite get some key buckets to drop on this day. 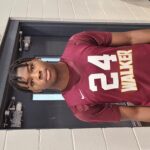 WALKER STANDOUTS: There are sophomore backcourt combinations, and then there is CJ Brown and Ricky McKenzie. So far ahead in their skill packages as well as their IQ’s, it’s hard to watch them and believe they’re only 2024’s with 2 years still to go. Sure, they’re young, they make young mistakes, but the good side is often so advanced and so spectacular that it’s easy to see how Walker can absorb some of those expected youthful missteps and post a 14-5 record (as of this posting). Brown checks all the boxes of your modern-day PG – an explosive athlete both on the halfcourt attack or in open space who gets to the glass for you as well with such springy lift he makes his 6-feet and change size completely moot. McKenzie is a more wide-shouldered 6-3 who looks and plays bigger than that, and combines a willingness to play with his back to the basket with serious deep shooting range, making him one heck of a matchup problem for bigs and smaller guards. I’d seen both this summer and again in fall leagues, but they’ve come so far so fast and the sky’s the limit for these two special talents.

ST. FRANCIS STANDOUTS: Despite not scoring in the 2nd half, former Roswell 2023 guard Jase McCullough looked engaged and sharp in the first half, and he may have found a comfortable home there in Alpharetta that can get the most out of his obvious gifts and body built for the next level. 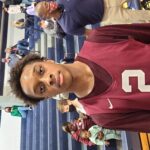 KEEP AN EYE ON this whole Walker team >> Andrew Carey, DJ Dennis and Rob Larson fill out the Wolverine starting five, and each plays a key role in support of their 2 obvious stars. Any damage done by them in what is shaping up as a potentially fun A-Private future bracket will certainly be driven by the exploits of Brown and McKenzie, but as we’ve seen so often in the past in close contests it’s often a role player that makes the unheralded, winning play.

WHAT HAPPENED: Lithia Springs W 63-49 – In the 2nd half of my Saturday double dip, I headed down just across from Piedmont Park to Midtown as a rolling Lions bunch came calling and withstood some energetic play from the always spirited Knights and came away with the road win. 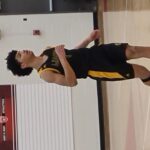 LITHIA SPRINGS STANDOUTS: Senior guard Cristian Willis has really taken off, using a really productive and highly competitive summer with AC Georgia to propel him into what has been a stellar and potentially Region POY-like season so far. Another 27 pts for the physical guard, as he fits the Lions system so well with their constant full-court pressure and halfcourt traps, and then finishes the run-outs with flair and effectivness. Another of those 2022’s around 6-0 that surely has the skills to contribute a the next level but is caught up in this spiral of recruiting right now that has high school seniors standing near the back of the line for spots. 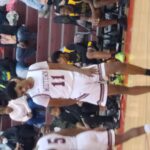 MIDTOWN STANDOUTS: Hampered a bit by foul trouble, we still got to see some of what makes 2022 guard Autrey Barnes such an effective scorer (17pts). He’s may be a lean 6-5, but he gets off the deck so quickly and is more wiry-strong than he might appear at first glance. He’s just one of those guys that knows how to find the bottom of the net, be it through traffic, hands in the face, double-teams on the perimeter, he’s smart, crafty and will be a really solid college player with how hard he works and with his great attitude.

KEEP AN EYE ON Khalil Porter >> Lithia, somewhat like Shiloh, is capitalizing on veterans who’ve played together for awhile now and are seeing the fruits of those labors. Porter came over from Pebblebrook, but has been with this core and the Atlanta Nets for 2 years. His 3-point shooting is a key facet of how well this team has gotten out (15-1 as of this posting), as he is the ideal draw and kick guy who shoots it a high percentage. Willis, PG Christen Williams, wing Langston Terry, all Nets vets, draw a lot of attention, and together with some young talent on the way up give this Lions group some intriguing lineup options despite their lack of a centerpiece big man.