WHAT HAPPENED: Centennial W 69-61 – The home Knights had to fend off a big effort from Hooch guard Tomiwa Adetosoye, but defense and veterans again paid dividends. 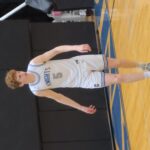 CENTENNIAL STANDOUTS: Taking full advantage of their size edge, the 2 senior bigs for Coach Matt Barksdale were huge particularly in the 2nd half. It was Wade Kahl early and Abdulh Diaby late, as Kahl had 12 of his 18 in the 1st half, while Diaby 17 of his 19 in the last sixteen minutes. This Centennial team interestingly is perhaps better equipped than last year’s crew, even without injured senior PG Brian Baylor, to make another 6A Final Four appearance, and most of that is due to this active and productive 2-headed forward combo. 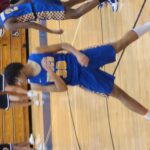 CHATTAHOOCHEE STANDOUTS: As mentioned, Adetosoye was a beast all game long, finishing with a game-high 28 pts and showing us the kind of slash and burn game he’s become so well-known for. The senior guard has always intrigued going back to Hooch’s title team of 2 years ago with his natural gifts, that his breezy smoothness can sometimes seem like he’s lacking effort, in truth he gets where he’s going in fewer strides.

KEEP AN EYE ON Mansir Williamson >> With Logan Turner and Kyle Duncan gone, when a big bucket is needed it will almost certainly fall to the talented junior. Barksdale can look inside for the hoop and harm with either Kahl or Diaby, but facing the basket in a diminishing clock and you need to break down a defense and get into the teeth, Williamson is right there with the other ballyhooed 2023’s in his class at being able to float one in or get all the way to rack with style and substance.

WHAT HAPPENED: Warner Robins W 62-61 – The margin was actually 4 headed to the final seconds as CSHS added a last-second bucket in this fun intersectional matchup, but this was still a very good HS-basketball game with runs by both teams that spelled the difference. 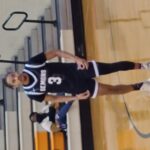 WARNER ROBINS STANDOUTS: Deep and experienced, the Demons have the look of a group that can rely on a different guy every night out. Senior SG Rashaun Williams, who impressed me at Hypesouth’s Fall Showcase, has the look of a consistent scoring threat and can certainly get steamy from 3. Highly-touted sophomore PG Cam Perkins didn’t factor hugely on this day, but that’s what makes this roster so interesting, as the senior trio of Jordyn Keith, Antwon Jackson and Daveon Walker were more than ready to pick up the slack (25 combined pts). This team has to be taken seriously in 5A. 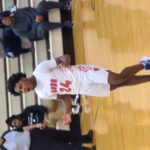 CEDAR SHOALS STANDOUTS: The Jags play like the proud program they are, and I knew no matter what twists the game took, they would show up on their home floor even coming off a back-to-back. Speaking of back-to-backs, diminutive but downright explosive senior guard Kashik Brown put together as impressive a back-to-back as you will see coming off a Friday night 51-point performance on that same floor in a win over Flowery Branch. He followed that incredible evening with 32 more vs the Demons in a fun to watch and valiant fight to try and get his team the W. They’re positioned well in 4A-Region 8 to capture one of the 4 state spots, and once there whomever they draw will not be pleased to have gotten them in their first-round game.

KEEP AN EYE ON Gabriel Jacobs >> The WRHS vets deserve the lion’s share of attention, but this freshman guard has the look of a future star. He started on this day, and he’s more than ready to assume that responsibility, with a varied game of calm 3-pt shooting and a confident slash-game to the rim. There’s a poise about him that belies his age, and scouts can also sniff that out and see the intriguing writing on the wall for his future.