Here are some notes below from my “2-for” on Tuesday: 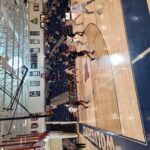 WHAT HAPPENED: Centennial W 59-23 – A seriously perplexing afternoon final despite the stellar defense Centennial (5-0) put on the Greyhounds, who had come in 3-0 and put some points on the board. Neither team started off like gang-busters at the offensive end, but the Knights got a spark in the 2nd qtr from junior guard Mansir Williamson (14pts), who we know can be a bunches scorer with dynamic ability to break down defenses and get out into space in a flash. Playing their first game since losing senior PG Brian Baylor to a torn ACL, you could sense a bit of urgency from seniors Wade Kahl and Abdulh Diaby up front and guard Darion Galloway to assert without Baylor’s steadying influence and steely leadership. Top tactician head coach Matt Barkley will find a formula minus Baylor that will lead to wins, and expect to see Centennial right there for the Region title and beyond. Pope (3-1) is far better than this result, and with a strong senior core of Jack Dempsey, Trey Kaiser and Cam Bleshoy, they’ll put this one behind them and be the typical thorn in the side of some of the heavyweights they face in 6A-Region 6 as few coaches in the Metro do more with less than Pat Abney.

KEEP AN EYE ON Kennedy Warren (Centennial) >> The 6-3 sophomore was already likely to be a top 7 guy in the rotation, but with Baylor out and Williamson sliding over to more PG minutes, Warren and his slithery 6-3 wing play possesses a lot to like as a young scorer, and will develop quickly for a mostly seasoned Knights team that still has the players and the experience to make another deep playoff run.

WHAT HAPPENED: Cherokee W 89-68 – This 8:30 start was fun from tip to final horn, as both teams went at it at a frenetic pace most of the way with Cherokee having the better overall shooting day in the end and knocking down 14 3’s in the process. The sensational junior guard duo of Cam Pope and Tayden Owens had it all on display, as Pope finished with 32pts (7 3s) and Owens 28 (5 3s). What we saw from the two Wood Elite stars was precisely what scouts want to see from them – Pope using his excellent and relentless driving ability to loosen up defenses for his potentially lethal 3-pt shooting, while Owens gets seemingly stronger in his forward push each outing and uses a deft handle on O and quick hands on D to create offense going downhill before he too buries you from 3-land. New Warriors Coach Joe Viehman has unshackled his thoroughbreds in an entertaining up and back style, and also features sophomore riser Braylin Giddens in the backcourt. Juniors Mason Bennett and Dastin Hart add hustle and play defense and rebound like the kind of role guys every good team needs. Senior Caleb Richardson just came on board from football, and at 6-6 (with a future as a wide receiver at the next level) can still be a factor on the hardwood for this group. Marist (3-1) showed zero letdown in the face of Cherokee’s hot shooting, and has a lot of fun pieces of their own that will only get better as the season rolls on. Georgia Express Ledford brothers Garrett (a junior) and Davis (a sophomore) are skilled and savvy ballers who came over from Brookwood, and fit really well into the structured but up-tempo War Eagle system alongside the likes of inside bull junior Grant Erickson, senior 2-guard Quinn Damm and slick junior PG Jesse Gaynes. 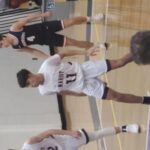 KEEP AN EYE ON Miguel Perea (Marist) >> Perhaps no one in the early going has unexpectedly wowed me more than the 6-2 junior Perea, who looked like a grizzled veteran out there carving up Warrior defenders for an 18 points that may not sound like much, but was impressive in its advanced variety. He can shoot it from deep and has a nice first step, and there just isn’t a move or shot that isn’t available in his arsenal. A devilishly humble-looking must-see attraction down off Ashford-Dunwoody.