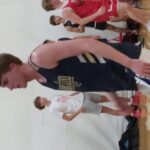 Such an under-appreciated athlete, it’s seemingly not until you take the floor against Kenah that you realize you’re being burned up and down the floor and at the rim as well. He’s got great size for the next level, plenty of lift, and stepping up as the main guy this year after graduation losses he has shown no hesitation in lighting it from deep when space is available. The shooting range, the ballhandling, the rebounding from the guard spot, the willingness to make the extra pass, that in particular is a custom of the Pius program which isn’t right in the mix once again at 8-1. He can guard 1 to 4 if needed, is consistently in the 15-20 pgg range nightly, and it’s so very worth the trip down to check him out just inside the perimeter.

Few players in the metro did more with the Showcase season than Lewis as he went all over town in the spring and fall and drew raves in the process. The sneaky lift off the deck always seems to catch folks off guard, a lot of that comes at defensive end as he plays like someone closer to 6-5 around the basket. The work getting to the cup with an array of moves and no fear going through contact is the most attractive part of his game, but there’s shooting range to keep defenses honest when they sag. The purity of his athletic ability and willingness to play defense with a real edge are the hallmarks of this potential recruiting steal, whose line of 17ppg, 10 reb, 2 asts and 2 steal per game speaks volumes. 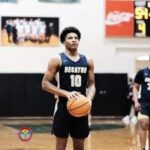 Beginning to hit stride after taking the usual 10 days or so for guys to transfer from football to basketball legs, you’re seeing now more in full the kind of physical downhill guard play Lanier can give you. With a WR-frame (which he plays in football), he has the hops to be a force at the rim, but it’s his polish as a scorer and particularly with terrific range and touch that makes him stand out. One of the prettiest strokes in the Metro, he can be an absolute bucket, and has that clutch gene when he’s out there that makes it seem like he wants the ball when the game matters. If he doesn’t play next-level football, he’ll look awfully good knocking ’em down from the wing for the right staff. 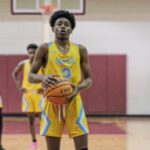 Playing with a ballyhooed teammate like fellow 2023 Saulamon Evans can mean eyes meant for him may only catch you when you seriously excel, and that’s frankly what Willaims has been doing on his way to 20ppg and 5 asts for Mays. There’s plenty of flair to go with a solid understanding of the PG position, something these days that’s valuable for scoring PG’s who still need to know how to run an offense if they’re going to be playing at the next level. The change of speeds is something that is noticeable with Williams, as he can appear to be on cruise control, but then is by you with a burst and a nice gamut of moves to both finish and create space for his J as well. Underrated for sure for a Raiders team that hasn’t been getting a ton of pub despite getting off to a solid 9-2 start. 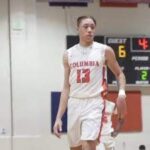 I like the length packed into his frame, makes him even more slithery than his attack-package already boasts, as he like all of the other guys on this list really excels at going at gaps and slicing his way to the basket. Reminds of Lanier in that he has the size and hops to play above the rim but the pretty outside stroke to hurt you from 3-land with regularity. Playing on another superb now 9-2 Columbia team, he’s got loads of moxie, experience and confidence to his game, and will be hard to miss as this Eagles team has all the hallmarks of another deep playoff run.