Team United based out of Charlotte, North Carolina might have been absent from the Nike EYBL this summer, but the cupboard isn’t bare.  Untied brought its young teams to compete in the Super 6 Showcase over the weekend and they fared well.  Both Team United 15u and 14u teams made the trip, and both teams played up an age group with the United 14u squad making an appearance in the 15u Championship game losing by 10 to Hoop Dreams(KY).

On Friday night I got a chance to watch the United 2018 team in there first game.  They came out of the gates hot taking a 20-9 lead over their opponent.  This team is well coached, with a ton of coachable players.  I was impressed by the amount of discipline these young pups had lead by Word Of God point guard Isaiah Tatum.  Tatum made sure his teammates ran their sets, and if nothing came of that they would turn the offense over of the lefty guard would attempt to create.  Tatum’s favorite targets to find were 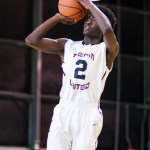 6’4 Qon Murphy (Hough HS) and 6’6 Jarius Hamilton (Legacy Charter).  The duo of Murphy and Tatum on the wing caused problems for opposing teams due to their versatility. At this stage Hamilton is a flourishing athlete that was active around the rim, while Murphy can do a bit of everything. 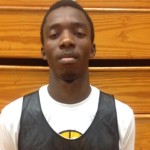 Add in 6’6 Chisom Obidike (Comenius School) down in the paint to do the dirty work and this team has a steady nucleus to build on going forward.

As for the 14u team, well this team is definitely one of the best in the country in their age group.  In their opening game they completely obliterated their opponent 77-17.  Throughout the tournament the 2019 kids weren’t fazed at all when facing the older competition.  They play as a unit, feed off one another, and everyone that stepped foot on the court knew their role.  It was good to see them struggle a bit in the championship game against Hoop Dreams.  It was a good learning lesson of how to respond when faced with a little adversity.

The team is well put together with a good balance of size and athleticism.  Their front court is just ridiculous, with 6’6 Christian Brown and 6’5 Juwan Gary.  This weekend they were missing 6’5 Nick Evtimov, son of former McDonald’s All American and UNC player Vasco Evtimov.  Brown and Gary more than picked up the slack in his absence.  Brown has the makings of a beast.  This year’s top prospect of Fab Frosh Camp, Brown controlled the game on the defensive end with his rebounding and shot blocking. Gary, was just spectacular when it came to running the lanes and finishing over the top of defenders.  His max effort was summed up in a play where ran cross court to save an errand pass, threw it in to a player on the other team, but recovered in time to meet the player at the rim for the block.

A few coaches took notice, of both teams throughout the weekend.  Arizona St. and Wake Forest were spotted on the baseline observing the two teams.  These two schools certainly won’t be the last as each team continues to grow and develop.  The Carolina’s are looking very fruitful when it comes to the hardwood.