The Arkansas Wings 16U won the Platinum Division at the first session of the Sweet 16. Photo Cred: Willie Evans

The Arkansas Wings Elite 16U showed up at the Sweet 16 in Atlanta over the weekend and treated it like the business trip it was.  The Wings used a swarming press along with being relentless on the glass to capture yesterdays title in 16U Platinum Division with a 52-49 over fellow Nike sponsored team the Alabama Challenge.  This young Wings team is well coached and boast plenty of future Division I talent including at least five players that should gain high major interest in the future.

On first glance as the team walks into the gym you are immediately sucked in by the size of the front line which includes 7’3 Fr. Connor Vanover, 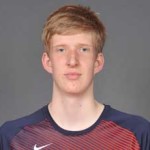 6’10 So. Daniel Gafford, and 6’7 Kris Bankston.  All three players possess very different skill sets, with Bankston and Gafford being more of a combination of length and athleticism.  The 7’3 Vanover stands out of course because of his height, but his ability to shoot the ball with ease is what had coaches in awe.  The freshman can catch and shoot it from anywhere on the floor and proved to be a lot tougher than he looks.

As far as their guard play over the weekend, it was nothing short you spectacular.  Lead by 6’2 guard Casey Benton the wings were the best transition team of the entire weekend regardless of age group.  Benton can flat out fly and his excellent lateral movement and change of pace caused tons of problems for opposing guards.  Speaking of speedy, 5’8 point guard Tevin Brewer should be mentioned as well.  His job was simple, break down anybody that steeped up to defend you and find the open man.

When Benton and Brewer weren’t finishing plays themselves in the open court they were finding 6’4 wing Jerimaiah Toney for easy buckets.  Toney filled the lane on the break all tournament long displaying some good body control as he made acrobatic layups left and right. Its early in the travel circuit season, but this Wings team should without a doubt capture themselves a spot at July’s Nike Sweet 16 in Augusta.