ATLANTA, GA – Back to Maynard Jackson HS we went for this year’s iteration of the UA Hard in the Paint Give Back Classic, sponsored by The Sports For Champions and Atlanta Xpress.

Friday’s action had quite a few terrific performances, in Part 1 of 2 we highlight some here:

Physical downhill guard has always impressed with his fire and effort, can run a team or be and effective scorer off the wing with good range and a great IQ for the game, such a stout upper and lower half makes him a versatile defender as well, again that strength and leaping ability means he can be effective hitting the boards from the backcourt as well, a good get for a next-level school looking for a guy who can step right in at either guard spot. 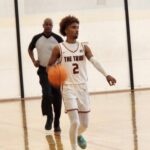 Was looking forward to seeing another solid southside program in action and Brown and his Tribe mates didn’t disappoint in a convincing win over KIPP, Brown was fun to watch mixing bits of the spectacular with some really sound PG play as a distributor, he scored getting at the rim with flair and efficiency and showed off tight range from 3-land, among the day’s best passers as well he makes the game look easier than it is. 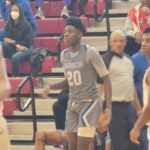 Treadwell’s versatility stole away some of the fanfare from powerhouse riser 2024 forward Kameryn Fountain (22 pts vs Holy Innocents) who was superb as well as a bull around the basket, Treadwell impressed in particular with his multi-level work and versatile attack package, he has a long first step off the bounce that gets him by people as there’s length and vertical in his frame, no fear stepping out to the arc and like the whole Washington team gets after it on the boards, an emerging name in this stacked GA 2024 class. 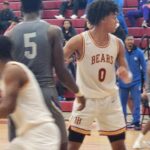 Here we went again with Hopkins having to seemingly fill multiple roles this time with 2025 star Caleb Wilson sidelined with a broken wrist, and fill them he did and not just ably but with his typical fight-and-claw defensive work both on the perimeter and guarding the big Washington frontline, offensively in his 22 point effort he was in full basket attack mode and got to the line 14 times while converting 11, you can see the basketball mind at work as he breaks things down out there and just continues to rise the ranks and with an offer from Kennesaw St already in hand that interest level from D1 schools will surely continue to grow. 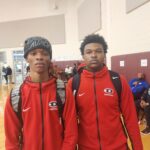 The Dawgs feature such balance and depth as Braxton Cooley was a factor from 3-land and guards Adrian Avery and Davarri Barhtell posted their normal all-around steady production as well, but when you watch this team it kind of feels like when the chips are down it will be Edwards taking the big shot, he has settled into a confident position as their top overall scoring threat with his ability to classically carve up in the mid-range and then attack the basket with a flourish, quite simply one of the best available 2-guards in the entire ATL-Metro who is next-level ready and can seamlessly fit in.

Coming off a big-time travel season with Promise Elite it wasn’t a surprise to see Wallace back out there with his Bulldog mates and looking the part of a big-time scorer, an absolute bunches-type buckets guy who can go on some runs with pace up the floor and by people or spotting up at the arc and killing you from distance, had all 17 of his points vs Dutchtown in the 2nd half after a slow start and that’s just the kind of furious production he can render in a defense.