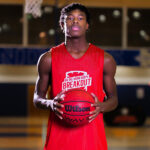 Rapidly moving up the charts to the top of the 2024 class is the exciting Lee, who is a true bunches-scorer who gets into such a rhythm at times he almost seems in a trance, were it not for his great vocal nature and enthusiasm on the floor it would be trance-like but he uses that energy both to fire up his teammates and take his all-court game to another level, with his size and frame he can guard virtually the entire floor when called upon, lights-out range and serious explosion at the rim this junior is one of my favorite full packages in town at the guard spot. 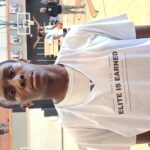 Been a fan of Djobet’s game since catching his act with the GA Stars over the last year, another bunches-type scorer in that he can go off for multiple possessions and has momentum-changing effect on the game, he’s smooth and sleek on the attack but has that stringy strength to go hard at the hole and spends plenty of time at the FT-line, shooting range out past the arc makes him unpredictable and he’s a tireless worker at both ends, Solid Rock is getting around town schedule-wise so hopefully he gets seen enough although his spring/summer work will be obvious to coaches in attendance. 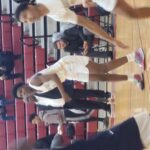 One of the weekend’s great surprises and quite the reveal as the sophomore showed off exciting athletic skills and a wing-game that is ready to unload, but with two years left of development has the sky is the limit as he’s sure to enter a more prominent role in years to come, playing with a loaded veteran backcourt of Kenric Lanier, Parker Axam, Henry Willis and Turner Cummings he still managed to show off his burgeoning skills including a 10-pt 4th qtr that included a pair of 3’s and was fun to watch from ground level. 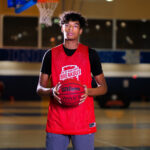 So much is expected of Smith when he takes the floor with his clear and obvious gifts that evaluators can I think be hard on him, he’s the kind of guy as I’ve watched that feeds off team energy and with the Pats playing really strong basketball in the first 3 weeks particularly at the defensive end he has like his teammates been feeding often, vs Cumberland Christian they had their hands full for sure with their bevy of offensive options but once again led by Smith had another energetic effort at both ends, Smith can be a terrific rim protector and on-ball defender who can guard the backcourt and frontcourt, in this game we saw too some of his exciting aerial abilities on O near the rim as well as the dangerous add-on of a sweet stroke from distance, he’ll scarily get so much better as the year rolls on.

Speaking of skyrocketing profiles in this early season Hamilton appears to be aggressively staking his claim to one of the best in the 2023 class, last year as a sophomore and this past summer as well it was easy to see the skillset on the rise with this gifted athlete, now with a bigger more stout frame and a maturing approach he has become near unguardable in spots as he is a lethal 3-pt bomber but has a burst to the basket that is brutally tough to stay in front of, with that improved frame he’s playing and scoring through contact so his numbers have been and likely will continue to be tremendous.