ATLANTA, GA – Atlanta Xpress and Maynard Jackson HS hosted two days of hoops over the Thanksgiving holiday weekend, and OTR was in the house for the first blocks of Day 2.

Generally smaller, lesser-known programs populate those early time slots, but there were plenty of guys who shined, here are 8 from the first 3 games alone: 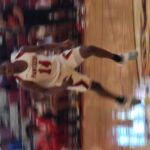 Was all over the place at both ends in giving Hapeville Charter all they could handle after the Hornets finally got there over 45 minutes late, finished with 26 points mostly from aggressive penetrating or being the beneficiary of a team willing to share the ball amongst a deep rotation of athletes, the defense and effort from Jones and all the Panthers was classic Therrell and led them to the 85-60 win.

Good group of unsung seniors on the Panthers squad as Clayton plays a lot bigger than his 6-4, forget about it once he caught it in close as he was an automatic finisher around the bucket notching 26 points of his own to share team-high with Jones, hit the class hard and played like all with that signature Therrell energy.

Good-looking scorer on the south side of Atlanta who had to do a lot of heavy-lifting against superb Therrell pressure defense, physical and downhill to the basket as it was a flurry of 2’s on his way to a game-high 28 points, can be your modern scoring point or slide to the wing with his shooting touch.

Undoubtedly one of the state’s top 2024’s is Fountain who was so impressive last year as a freshman and this summer with Team Huncho, already with the frame of a much older player he can be an absolute bull at the rim but also shows the maturity to use his soft hands from 8 to 12 feet, a killer on the glass he’s efficient and powerful (21 points vs Carver) and a lot of fun to watch, together with rising 6-8 fellow sophomore guard Tyrek Woods gives the Bulldogs an exciting young nucleus in a 2A title chase that’s right there for several contenders. 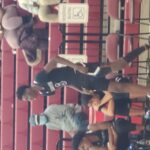 We’ve seen a bunch of really good freshmen already in the early season and Bynum is right there with all of them, long and sleek out on the floor he likes spotting up from 3 where he has a super quick release and loads of confidence from 22+ feet, at that size he’s virtually unguardable out there as he shoots over just about anyone, he showed a little off the dribble vs Carver but that is a part of his game together with using that length closer to the basket that is on the come, still a blast to watch and so enticing as a future star prospect. 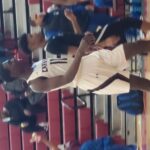 Speaking of a blast to watch almost no one made a bigger impression on me over the entire holiday weekend than Floyd, the Panthers play hard and never let up but Floyd has to carry a heavy load as their primary scorer and didn’t disappoint with a sweet stroke from 3-land and a slithery style getting to the rim, he’s cat-quick in the open court (game-high 23 points vs Washington) and a really tough stop in space for opposing defenses, a top available guard in the city of Atlanta who has the package to play and excel at the next level.

So much is made of the Newton group of juniors but you’d be remiss as an evaluator to overlook the special abilities of the Warrior group led by Ferguson and his energy and enthusiasm, playing mostly PG on the day vs a really good Solid Rock Academy bunch (23 points) he was poised but aggressive & strong with the ball but able to finesse his way through traffic, the frames of these Warrior studs allow them to play the bull-role when they want but I love Ferguson’s ability to morph between bull and dove, together with the dynamic skills of fellow 2023 Markel Freeman they make for a devastating combo, and this a definite 6A state title contender. 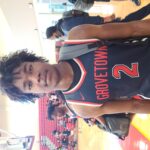 Coming over from Lincoln County this year Sherman adds a perfect complement t to super-sophomore Derrion Reid on the interior with his selfless play and ability to finish at a high rate on the catch in close (21 points), he’s nimble but also has a frame to match his ballyhooed teammates and they simply wore down what was far from an undersized frontline for Solid Rock, some nights will be Sherman’s and some nights will be Reid’s but that’s ana awfully good problem to have when you have two interior options that good (and we’re not even talking about 6-8 junior Aaron Nomel and his crazy wingspan off the bench).