SPARTANBURG, SC – The now annual trip up I-85 to the Upward Star Center is sure to produce some very good talent coming from North GA and the Carolinas.

The tremendous staff of the Upward Stars organization put on their Combine once again, and some faces from OTR appearances during the spring and summer as well as last year’s Combine showed out.

Here’s Part 1 of Standouts, as in a deep field we saw in particular some sure-to-track underclass names to know:

Among just a handful of GA guys on hand Priester nonetheless popped right off in drills with a smooth game, a lefty slasher with terrific finishing instincts he is a pure glider out there with a kind of hidden explosion that looks years ahead of his age, things were pretty easy and that wasn’t due to lack of competition, showed off some shooting range as well and coming from the highly successful Augusta-area Cross Creek program means you’ll be seeing more and more of him as the years unfold. 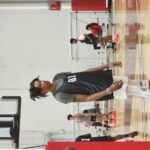 Freakish athlete put on a show above the rim both in drills and later in live play with some seriously high-flying antics, that alone drew raves and eyeballs as he was yet another 2025 slithery attacker who with length to burn was a lot to handle for most guys in attendance, has a little more to show in the overall package as a thoroughly dynamic multi-level threat but a just a sophomore with such natural gifts this has the look of a developing high major prospect. 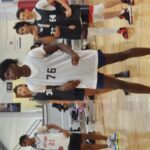 We got a chance to see just how good the Gray Collegiate program is when they came down to Atlanta last winter, with so much intriguing size on hand at the Combine it was easy to find Graham early in the day as he was a terror in 3 on 3’s and used every bit of his length as a disruptor and high rising finisher, later in live play he stepped out past the arc a few times with a natural looking jumper and that opens up even more possibilities for his next 2 years. 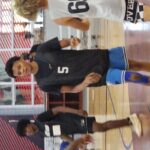 Remembered Brown both from last year’s Combine and his work with Upward Stars Pee Dee this spring on the OTR circuit, seems to move on air as he covers ground with a sneaky pace and super-tight handle that is some born to be a PG stuff, it’s a “get him the ball and let him go” kind of attack and he was one of the day’s best passers finding gaps and threading the needle to guys in transition and over the top of the defense, a lead guard to watch in SC. 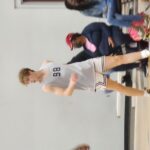 One of the better all-around 2023’s I saw Wilson was a Mack Truck out there with a college-ready body and a versatile game that hit pay dirt from multiple levels, using power he got at the rim often with ease but showed off some slick footwork and agility with spins and crossovers, had good range past the arc and handled the ball well as a big guard when needed, has a nice low to mid-major appeal with the frame and measurables.