EMERSON, GA – We continue our coverage of Halftime Sports’ US Basketball Games with Part 2 of standouts from the state of Georgia (in no particular order):

In the GA vs GA game I caught Bellomy there were multiple bigs of note (Evan Daniel and Terrell Reeves of North Cobb and Soloman Mustafa-Reid of Paideia) but I found myself hitting my pad more than a few times to note Bellomy’s improvement in so many areas from even earlier this spring with SBT, loved the movement both getting up and down the floor and being ready to catch and convert off the feed, he seems to be growing into his frame as he’s gained inches in a short span, a big to watch in a deep 2023 class. 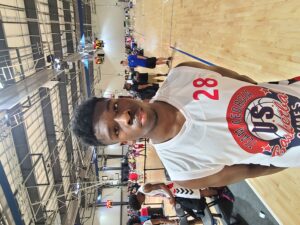 In a team made up mostly of Gwinnett prospects Kilpatrick personified the fight you generally see from programs in that County with his boundless hustle and fearless attack, showed he could handle pressure out front and was excellent off the ball coming downhill on the break, did show some shooting range to go with the other positives.

A pure spot-up shooter who loved his time in the corner and knocked down multiple 3s in their tough game with a really strong South Carolina club, the stroke was natural and he was ready to let it go, can’t teach a willingness to shoot it when called upon and the confidence was noticeable.

The bloodlines will be familiar to ATL-Metro fans as older brother and 2021-grad Taihland is off to the MAAC to play for Siena, last summer we saw impressive glimpses of where his game could go, this summer he took the bull by the horns and embraced the freedom given by Wood Elite and specifically coach Spencer Dixon, the whole group was playing up a division but that did little to deter this dynamic scoring PG prospect with power and speed packed into that under 6-0 body, a superb on-ball defender with sticky hands, he can be an effective passer but his hay is offense and we’ll see plenty of it for the Warriors in 3 months as he buoys a backcourt lineup which will include tantalizing 2023 riser Cameron Pope and do-it-all summer breakout 2023 Mason Bennett.

One of two 2022’s (fellow Chief Fisher Mitchell the other) joining the core of what was Wood Elite’s outstanding 16U bunch all of whom as mentioned playing up a division, my past assessments of Wolle have highlighted what most scouts in town see – great leaps in confidence taking his game beyond the high-level 3-pt shooting that which has garnered him significant looks from D1 programs, I’m particularly enamored with that dribble-pull-up package which harkens back to another era yet provides him a super effective weapon vs defenders who haven’t seen many pull-up J’s in their time, set I believe for a mature and potentially monster senior season seeing precision feeds from the likes of a pair of vigorous PG’s in steady 2022 PG Kyle Keener and slick 2024 Rodrigo Farias.

With Scoot Henderson gone to the G-League it was going to be an interesting fall up on the northern edge of Marietta, it got even more interesting as what was already going to still be a really good team got better (and taller) with the arrival of Marshall from Norcross (to join Gainesville transfer 6-8 Sahmir King), there’s work to be done with this young talent but being only a sophomore it’s a project with all kinds of intriguing possibilities, for a guy his size the feet are quite workable and the natural ability to catch and finish is certainly there, playing with the likes up front of tremendous workers 2022 Dylan Cambridge and 2023 Aaron Smith will be a great benefit for this up and comer. 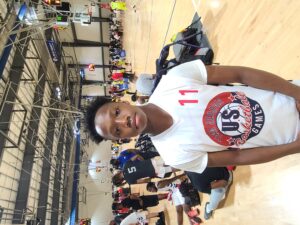 Playing up didn’t seem to bother this highly-confident lead guard at all, he’s got flair or control whenever he needs to call on either, can slice up a defense with craftiness on the bounce or pure speed on the blow-by, there’s a certain moxie and comfort level on the floor which oozes from Smith, the underrated Grove program is loaded right now so his time will be down the line but it should be fascinating to observe his growth.

Grayson-transfer Jewell first caught my eye back in June as Walnut Grove was playing all over North Georgia and making a statement in their consistency and performance-level, unlike future side-by-side backcourt mate Smith, Jewell will be a notable part of a deep guard rotation for Coach William Witherspoon, he’s got a gorgeous and effortless 3-pt stroke that tickles the net to near perfection, can slide over and handle the point with no trouble, he’s kind of a quiet guy who just possesses a lot of skills in his toolbox and goes out there and gets the job done without a ton of the extra stuff.