MARIETTA, GA – We move to Part 2 from Wood Elite’s Top 100 Showcase at Kell from a week ago, with 4 guys who were just too good to miss.

Had the most impressive showing overall to me, just a monster at times at both ends as he can dictate whatever he wants in spots with an offensive game that has both skill and edginess, showed more of a face-up handle than I’d seen to this point and combined that with more interior dominance even with plenty of other frontcourt talent on hand, already a good frame with a whole year to add to that, on a Falcons team that is once again stacked with names he appears to be edging to the feature spot. 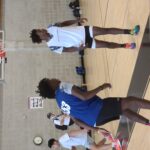 Matched with Simon in one of the day’s coolest and most entertaining one-on-ones, Hendricks too continues to add to a physical package that was already imposing, the soft touch on the J from 15+ is sure to add to his growing profile, the footwork and agility in closer to the basket just gets better and better as he moves into this crucial junior season and one for the Mustangs team which could be special, don’t sleep on the defense either as he can guard the block like a center and swat shots as a rim-protector.

The energy and enthusiasm were at the highest level I’d seen in some time and the results were stunning as he glided, flew and blew-by anyone there whenever he got rolling in the open floor, there are high D1 moments where he looks like a top 5 player in the state with such gifts, the slashing is A-List and the shooting from range can get hot in spurts, defensively he can guard so many spots with the size and length at guard, feel like with consistent play at the level from this Showcase he potentially vaults into the next stratosphere of attention. 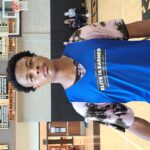 All 4 guys on this part of a ridiculous 2023 class full of rising blue-chippers to be, becoming a fixture on lists such as these as he grows in confidence facing off with players of this caliber more regularly, the development of his perimeter game as a ball dominant-attacker has jumped out, he’s got the spot up shooting and the explosion to the rim but now using the bounce more to break down defenses as a on-man wrecker has been interesting, with this Bulldogs team he’ll have a great chance to feed off their other stellar guards while also being a key inside-out threat for them.