MARIETTA, GA – Wood Elite’s Quinton Wood and FUH3 Athletix’s Spencer Dixon put on their Top 100 Showcase at Kell HS last weekend, and there was an entertaining and skilled mix of big names and new names to watch among a big turnout.

Below we look at 6 guys who really came out of the camp with notable eye-opening energy behind their performance:

Outside of the marquee names (to come in Part 2 of my coverage) on hand nearly all of whom really played hard to further distinguish themselves Djobet was the most unstoppable force I saw, his 6-6 can look like 6-9 at times the way he with his long arms slithers through defenders and covers a ton of ground with a stride that seems endless, explosion at the rim is the likely result when he gets in tight but he was also the master of the 2 to 3-dribble curl to the elbow for the sweet mid-range pop, there wasn’t a spot on the floor he couldn’t attack from and there wasn’t a defender there seemingly able or interested to block his forward progress, an impressive showing and someone who could rocket up rankings boards. 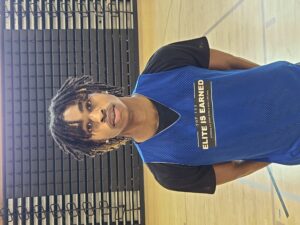 There was a smoothness and calm about how Johnson took on all comers Sunday, he was hard to take my eyes off of because of the interesting combo of obvious athletic gifts as well as an efficiency in how he broke down a defense, outworked guys without seemingly looking like he was exerting himself a whole lot but he was, looks more the part of a lead guard prospect but has enough shooting and slashing to be a factor on the wing in a rotation, looking forward to seeing more but the building blocks are there for something to watch.

During summer play with GA Stars Select he was often in that lineup a stuck-fixture at 8 feet from the basket and in limiting in my view what he had in the bank, that kept him from showing what on Sunday appears to be a growing and intriguing perimeter package, in drills he showed off nice touch from 15-18 feet to go with his already known standard as an explosive leaper and defender around the rim, he showed off both of those and a better than expected handle in live play later in the day and was up and down the floor with great energy against some top frontcourt talent from around the ATL-Metro, still just a junior the room he has to grow is super interesting. 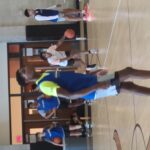 It’s usually the steadily growing outstanding play of 2023 PG Keishawn Hampton or the burgeoning physical package behind 6-7 2023 PF Eddie Henricks that draws in both eyeballs and headlines for the Mustangs, but I particularly liked the effort-level both in drills and in game play from Richardson as he showed me a little more assertiveness and a willingness as always to do whatever is necessary to make an impact, he’s an exceptional athlete already who’s shooting is on the come for sure so this year’s Mustang crew is must-see for some of their many on-the-move prospects. 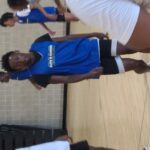 Coaches and trainers running the event kept turning me to during live play wanting to know who he was and where he went, I didn’t know myself until asking around the gym but it was clear it didn’t matter as his speed, quick burst using the dribble and overall on-court acumen was impressive to most in attendance, didn’t get to see a ton of shooting from long range in that kind of setting but everything in the open floor, guarding the ball and getting to the rim was worthy of more attention going forward. 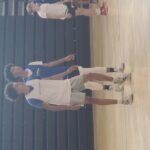 Great lift off the deck in drills and loved the way he finished around the rim, long arms allow him to look and play bigger, classic wing slasher showed off a nice touch from 15 feet and in, that length offers him defensive versatility which is always a big bump in recruiting, plays with a bit of a chip as an under the radar guy as we’ve seen with Cass guys (see 2021 guard Braxton Benham), in a monster 2023 class for guards he bears watching as he enters a feature role (no more Zaylan Chaney up in White, GA) and his overall game evolves.