The inaugural Youth Icebreaker featured some of the best youth teams in the Southeast.

Atlanta, Ga–  In the first event of the spring, elementary and middle school players made their way to both Marietta and Hiram High School for the On the Radar Hoops Youth Ice Breaker. This event gave the next wave of Southeast talent to showcase their skills and give players a chance to play since their recreational and middle school seasons have ended. Below we take a look at some of the best players from the weekend and class of 2023 and 2024 names you should be familiar with going into their freshman seasons next winter.

If you’re looking for the purest point guard at Youth Ice Breaker this weekend, look no further than Austen Colton. The FreeBandz floor general led his team to the 8thgrade championship and did so in a variety of ways. What impressed me most about Colton was his speed with the basketball. He seemed to get by defenders with ease and possessed the vision to find his big men for easy lay-ups. With so much speed as a ball handler, changing speeds to keep defenders off balance is essential and this is something Colten possesses as well. He wasn’t afraid to score the basketball when opportunities presented itself but was at his best when making the game easy for teammates which led to a lot of points against every opponent they faced. 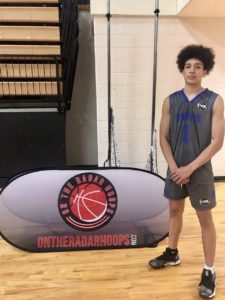 Without a few of his teammates in the championship, Clark tried to lead his team to victory and attempted to do so until the final buzzer sounded. The motor that this kid plays with is top notch and he has great size, standing 6-foot-3. Clark can score it on all levels and looked very comfortable driving the ball to the basket for tough finishes. He has a great set jump shot, and it is one that he shoots with a lot of confidence and range. Clark is a flat-out competitor and as a spectator, you could do nothing but respect the way he approaches the game when he steps out onto the floor.

Felton is a player that has one of the higher ceilings of any player at the Youth Ice Breaker. His mature frame at 6’1” mixed in with the way he handles the basketball as a future off guard or wing puts him at an immediate advantage when he gets into the lane. Felton has nice touch, connecting on several mid-range floaters and jumpers, and took over games in all of B Maze Elite’s victories over the weekend. Felton can shoot the basketball from three and showed several finishes when he got to the rim on both sides.

When it comes to purest passing ability specifically, Watkins impressed me during his first game for AOT. Threading the needle with passes through zones and defenders on the fast break put in him above the rest when racking up assists. The lefty has good speed in his own right, using that to push the tempo for AOT and did a good job of keeping his turnovers down while playing more of a risky but rewarding style of basketball at the point guard position. Watkins understands how to play and uses his strengths very well when out on the court.

Another lefty at the Youth Ice Breaker showcase, Pace is an off guard with unlimited range from the perimeter. He was one of the more consistent scorers on the weekends, regardless of competition. Defensively, Pace anticipated passes in the Georgia State Warriors’ zone press and seemed to be in the center of when 50/50 balls were being decided. A stringy player when discussing build, the guard from Carrollton has a nice crossover going both left or right and used that to create space for shots and to get into the lane against opposing defenses. 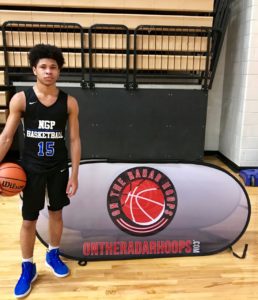 Wilson was another physically mature kid that used that advantage to score the basketball in bunches for NPG. I love the pace that Wilson was able to play with all weekend, using a big hop step to get into the lane of 2-3 and 3-2 zone defenses in the half court. Wilson is a very unselfish player as he knows how to make the extra pass to open teammates in transition with or without starting the break. He can get it done on all levels and understands how to guard his position, doing so at a high level with his impressive lateral quickness.

Lecadre wasn’t the fastest or the quickest out of the floor but he simply knew how to put the ball in the basket. Crossover, spin moves, or using a ball screen he found himself scoring or on the free throw line and did a good job as any of knocking down those free throw attempts when they were presented. Lecadre possesses a nice jump shot from three-point range and doesn’t mind pulling it from anywhere along the perimeter as he got hot from the corner in one game and the wing in another. He is a lead guard with good size and a sneaky good handle on the ball that he used to initiate the Georgia Man-Up offense. 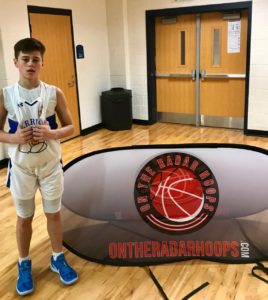 Rechsteiner may be the smallest player on this list but he plays the game with as much heart as any of the bigger kids and it showed every time he was on the floor. The GSW floor general has a maturity about his game that you don’t see in middle school players. He wasn’t fazed playing taller teams but instead used his basketball IQ to continue to make himself effective. Pump fakes, ball fakes, and extra dribbles to keep himself out of trouble were a normality for him and he was a great “quick” lay-up maker when oncoming shot blockers were looming. Rechsteiner was another knockdown shooter from three and made teams pay consistently when they left him open.

Count Doerger in as another player with tremendous upside moving forward. He stands about 6’6” right now and simply knows how to space the floor while playing inside. The B Maze Elite forward made a habit of sliding to the elbow when guards would drive baseline or sliding baseline when guards would drive the lane and was a consistent maker of jump shots from the 12-15-foot area. Doerger was also efficient right around the basket and impressed with his passing ability with limited turnovers in the middle of the zone press break.

Walthour had one of the purest strokes I saw at the Youth Ice Breaker. Combine that with his size at 6’ and you’ve got serious problem as a defense. He led 94 Feet in a win on Saturday and put up all of his points without a three point make, showing his versatility. Walthour had a good showing all weekend and will be one to look out for moving forward in future middle school showcases.