SUWANEE, Ga., – Suwanee Sports Academy hosted the Bob Gibbons Invitational last weekend, which featured some of the top teams in the Southeast. Here is a look back at the 2017 players made the biggest impression upon our staff. 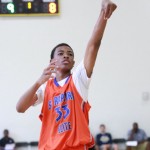 The rest of the world has not caught up to Claxton just yet. Still listed on many recruiting sites as a 6-foot-6 or 6-7 forward, Claxton has stretched out to nearly 6-10. His skill set still resembles a small forward as we saw him hit multiple 3-pointers and attack the rim with quickness while running with Team South Carolina. Given his length, ability to run the floor and protect the rim Claxton is just scratching the surface of his potential. Naturally he needs to add weight to his lanky frame, but we can see clearly that Claxton is a candidate to become a top 100 player nationally after this weekend.

Each year we find a player who is lesser known player who turns into a big story. This year it could be the 6-10 center from Prominence Academy. Here is a big man that is active, runs the floor and has a skill set that is far from unpolished. Although we did not see him block many shots, he does project to be a rim protector at the next level. Okon has already garnered an offer from Kansas State and given his current trajectory many more offers should follow. 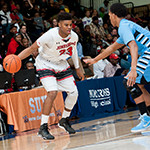 No secret here, the 6-5 shooting guard is consensus 5-star recruit nationally. His build, athleticism and strength through traffic have always been Walker’s calling card. However, we did see growth in Walker’s game as he showed a much improved jump shot this weekend. His ability to run off screens and shoot the ball with more efficiency is an important development in his game. If that jumper stays consistent, his game could be compared favorably to Syracuse freshman Malachi Richardson. Interestingly, director of scouting for 247 Sports, Jerry Meyer, predicts that Walker will land at Syracuse. Regardless, Walker has made a case to be the state of Georgia’s top perimeter player heading into his senior year.

Wilkes has developed both physically and his skill set since we last saw him at the Nike Elite 100 Camp in 2014. Today the 6-6 wing forward is a force inside and out. Wilkes showed range on his jumper while also bringing legitimate athleticism in the transition game. The part of Wilkes game that may go unnoticed is his passing ability. He often sees the play before it happens and delivers the ball on target to his teammates. His efforts were enough to help his team win the 17U championship at Gibbons on Sunday afternoon. Per Eric Bossi of Rivals.com, Rutgers is the latest school to offer the Florida native.

Williamson got everyone’s attention immediately Friday night after he caught an alley-oop pass and put a defender in a figurative coffin. The 6-6 combo forward is proving to be a problem for defenders. He has quick ups, strong hands and is a force of nature moving toward the basket. Although his jumper lacks consistency at the moment, Williamson is productive nonetheless. As we mentioned last week in our Recruiting Rundown, Maryland is the latest school to offer the man-child from the Palmetto state. See the dunk of the weekend below as captured by Elite Mixtapes: