Khavon Moore is one of the nations top prospects in the 2018 class. Photo Cred – Ty Freeman

The Georgia High School Association flaunts elite level talent at every position. The small forward spot features some of the country’s most highly touted prospects. Below, we analyze a couple of the peach state’s very best wing-forwards regardless of classification.

TOP OF THEIR CLASS 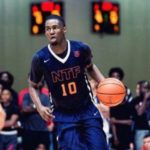 Khavon Moore, 2018, 6-8 SF, Westside-Macon High School (3A): Moore is a multi-talented wing with an all-around skillset that has high-majors in hot pursuit. He is the consensus No.1 ranked small forward in Georgia’s 2018 class. At 6-foot-8, his versatility is very intriguing. If the smooth point-forward can reach his full potential, he is considered a sure-fire pro by many. Alabama, Florida, Georgia, Oklahoma, Texas Tech and UCLA are all serious suitors for the blue chipper from Macon, GA.

Last season, he averaged 23 points, eleven rebounds, five assists, and three steals per game for Westside-Macon. He led them to a 25-4 overall record, as well as a trip to the state playoffs quarterfinals where they lost to eventual state champions Pace Academy. With Moore piloting the ship, expect the Seminoles to be serious title contenders again this season in Class 3A. 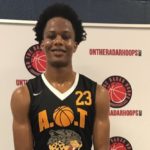 Isaac Okoro, 2019, 6-5 SF, McEachern High School (7A): Okoro, a physical freak of nature, checks in as the top wing player in the peach state’s 2019 class according to scout.com. His athleticism, physique, and skillset enables him to dominate on the interior and out on the perimeter. He plays well above the rim and is an elite defender. However, to take his game to the next level, he must focus on fine-tuning his 3-ball. Auburn, Clemson, Florida State, N.C. State, and Rutgers to name a few have all offered the 6-foot-5 slasher.

In 2016-17, Okoro was named Region 3-AAAAAAA Player of the Year. This season, expect the 4-star junior to once again be one of Georgia’s best small forwards. 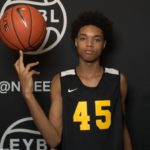 Brandon Boston, 2020, 6-6 SF, Norcross High School (7A): At the time being, Boston has separated himself and is seemingly the alpha-dog in the sophomore class. Scout.com rates him as a 5-star prospect and Georgia’s No.1 overall player in their early 2020 rankings. His emergence as of late has prompted division-1 programs like Georgia, Georgia Tech, USF, and Virginia Tech among others to pull the trigger. Kentucky and Villanova have also started to get involved. The slender small forward will be a key component on a star-studded Blue Devils squad in 2017-18.

Rashun Williams, 2018, 6-6 SF, Calhoun County High School (A-Public): Williams is a creative shot maker. The 6-foot-6 scoring machine really has a knack for putting the ball in the basket. He is a prototypical small forward that has caught the attention of mid-major schools. Middle Tennessee State, Tennessee Tech, Mercer, and Georgia Southern have all made official offers.

After coming up short in the A-Public state championship game last season, expect Williams to have the Cougars right back in title contention in 2017-18. 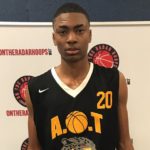 Elias King, 2019, 6-7 SF, Shiloh High School (7A): After transferring out of the state for a year, King has brought his talents back to Georgia. The 6-foot-7 junior immediately turns Shiloh into a contender in the Class 7A Division. He possesses great ball skills and is a matchup nightmare on the perimeter. Memphis, Miami, USC, VCU and a host of others have offered.

KJ Buffen, 2018, 6-7 SF, Gainesville High School (6A): Buffen, a versatile defender, can effectively guard the one through three positions. He stymies opponents with his lateral movement, length, and timing. Offensively, he is at his best when attacking the basket. The long-armed hoopster absorbs contact and finishes well through contact. At this point, KJ looks to be a mid to low-end high major caliber player. Georgia, Georgia State, Georgia Tech, and Georgia Southern to name a few have offered. 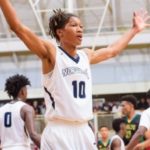 JoJo Toppin, 2018, 6-6 SF, Norcross High School (7A): You’d be hard-pressed to find a more athletic player in the country than Toppin. The 6-foot-6 high flyer often leaves spectators in awe with his highlight reel worthy dunks. Right now, his overall offensive skillset is a mystery; however, with extended minutes, the experienced forward will have an opportunity to put that question to rest this season. Mississippi State, Ole Miss, Tennessee and others have made Toppin a top priority.

Isaiah Kelly, 2018, 6-6 SF, Pace Academy (3A): Kelly has the combination of smarts and athletic ability that makes him a hot commodity for Ivy League schools and Power Five programs on the recruiting trail. His offer list ranges from the likes of Harvard, Princeton, and Yale to Iowa State, Vanderbilt, and Wisconsin. Whoever lands the 6-foot-6 senior will be getting a complete student-athlete.

Kelly has enjoyed back-to-back state titles at Pace Academy, but with the departure of 5-star Wendell Carter, the Knights will face an uphill battle on their three-peat quest.

Clarence Jackson, 2018, 6-6 SF, Wilkinson County High School (A-Pubic): Jackson is a mid-state player with championship DNA. Over the past two seasons, he has been a key piece in Wilco’s repeat championship puzzle. The 6-foot-6 wing has a high motor and consistently hangs around the double-double stat line. He is an above average defender and rebounder. On the flipside, he must improve his ball handling and jump shooting in order to ascend to the next level. Florida Gulf Coast and Eastern Kentucky were among the first to offer. 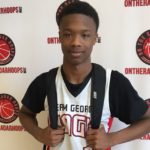 Cameron Holden, 2018, 6-5 SF, Mary Persons High School (4A): Holden is a throwback player that has little junk yard dog in him. His old school style isn’t popular nowadays; nevertheless, he consistently produces at a high rate. Last season, he was named Region 2-AAAA Co-Player of the Year. Heading into his final season, he has posted career averages of 18-points, seven rebounds, and four assists per game. The 6-foot-5 forward does a little bit of everything well, so expect him to have another huge statistical output in 2017-18. Low-majors such as Charleston Southern and Winthrop have been in contact.

Kavonte Ivery and Brandon Younger are also two quality wing-forwards worth mentioning heading into the season.