The spring travel season is here. Next weekend will mark the first NCAA evaluation period and with it the class of 2017 will become the hot class for college coaches. Here is a quick look at which players are poised for breakout years.

If there is a wing that is poised to bust into the top 25 consideration this year it is the 6-foot-5 wing from Las Vegas. He averaged over 14 points per game last year on the EYBL circuit and also had a solid showing last May at the USA U16 Trials. His length and ability to get to the rim are his strong suits currently. At the same time he has proved himself to be a capable 3-point shooter. Most recently O’Bannon has taken unofficial visits to Texas and Washington.

Fresh off of a High School National Championship with Oak Hill, the 6-2 guard is poised for just as big of spring and summer. Playing in a talented back court gave the guard the confidence to make plays and take risks on both ends of the floor. He found a niche’ as a 6th man for coach Steve Smith’s team who could bring energy as a lock down perimeter defender. Yet it was his timely shooting and aggressiveness as a play-maker that give him upside as a college prospect. Per Andrew Slater of 247 Sports, Shuler has offers from Clemson, Florida, North Carolina State and Southern California. 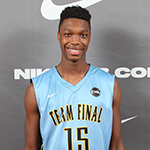 Walker positioned himself as one of the better 2-guards in the class last year on the EYBL circuit. He averaged over 13 points per game as a rising junior while shooting over 40% from the arc. His ability to play in transition while also hitting jumpers make him a very versatile offensive player. Standing at 6-5 it has been reported that he has over 40 offers heading into this spring evaluation period. Some of the more notable offers come from Ohio State, Stanford and UCLA per @D1Circuit.