Jacara Cross of Lithonia is one of the top available post left in the state of Georgia. Photo Cred – Ty Freeman

Atlanta, Ga. – The regular season is coming to an end, there are still several post around the peach state that will help a college program next season. Here are several unsigned seniors that have took advantage of the spot light this season. 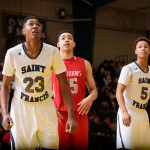 Chance Anderson – (Alpharetta, Ga) St Francis – Anderson is a dirty work forward who gets things done on the weakside. He may lack ideal size for a power forward or a post, but he has long arms and enough bounce to finish above the rim. He is an athletic finisher in transition and lob threat because he runs the floor at high speeds on a consistent basis. He hits the glass on both ends and is extremely hard to box out because of his great energy and effort

Kohl Roberts – (Atlanta, Ga) Riverwood Academy – Roberts is a big body forward with thick shoulders. He does a good job of boxing out each time a shot goes up, which demonstrates his active feet and high motor. He did not show a weak hand and will turn to his right hand even with an angle to score with his left hand.

Kyrin Galloway – (Milton, Ga) Milton High School -This pick ‘n pop power forward can knock down the three with regularity. He has great form and makes it look easy. On the break he can run the middle of the floor and be the first post or the lane and spot up. He also does a very good job of reading guard penetration and getting to the open area to shoot his mid-range jumper.

Jacara Cross – (Lithonia, Ga) Lithonia High School – Cross is a physical specimen with a long and athletic build, good muscle tone and definition, and plenty of room left on his frame to add further muscle. He is a good athlete who plays well above the rim and has good mobility for a big man. Offensively, he is most comfortable facing up and going to the rim with limited dribbles but also gets easy points by finishing plays around the rim 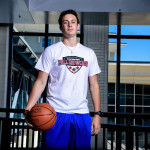 Robert Hill – (Lilburn, Ga) – Action Sports Academy – Hill has impressive skills for a player of his size, He has the ability to connect on jumpers with range. He is very active inside and gets numerous tap-ins and short put-backs. Defensively he utilizes his length to change and block some shots.

Bryce Smith – (Powder Springs, Ga) McEachern – This long and active forward has great length when he finishes around the basket. Whether it’s a dump off pass, offensive rebound put back or a post move Smith impressed our staff throughout the season. Defensively he utilizes his length to change and block some shots. He does a good job of rebounding inside and outside of his area.