Class of 2016 Bobby Anderson of Boyd County HS proved to be one of the top players in the Tri-State (KY-OH-WV) area at the Roundball Classic last weekend. Photo cred – Ty Freeman/#EBAAllAmerican

ASHLAND, Ky., – For high school coaches, the pre-region schedule is about competition and quality match-ups. The Roundball Classic hosted by Boyd County High School last weekend provided exactly that platform in the Tri-State area of Kentucky-Ohio-West Virginia. On top of that, the weekend of basketball provides exposure for individual players who are looking to build their reputation for the next level. Here is a look back at this weekend’s notable individual performers.

We first saw the 5-foot-10 point guard at the EBA All-American Camp in September. We predicted that he would put up numbers for Boyd County High School during his senior year and we were right. On back to back nights, Anderson went for 29 and 35 points at the Roundball Classic. What Anderson may lack in size, he more than makes up for in speed and skill. He showed he could his own shot score with efficiency. Expect more college coaches in the Tri-State area to jump on-board with Anderson in upcoming months.

’16 Bobby Anderson has 17 at the half for Boyd Co. It’s a dog fight at the Roundball Classic @MrAnderson_4 pic.twitter.com/3FOgSuDTXe 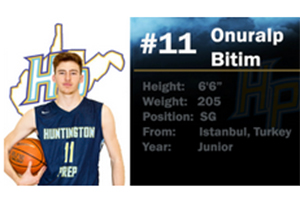 While Miles Bridges attracts a lot of attention for coach Arkell Bruce’s squad, there is plenty of next level impact guys on his roster like the Turkish born Bitim. Standing at 6-6, he is a very good athlete who showed he could score in transition. At one point Bitim caught an alley-oop pass and threw it down with authority to rev up the crowd in the Friday night match-up with Cape Fear (NC). Add in the fact that Bitim is an exceptional shooter from the arc and he is a dual scoring threat in Huntington Prep’s back court.

The weekend’s final match-up, Chaffin and Lawerence County played spoiler to the home team’s plans. Although Boyd County would pull within a few points in the game’s final minutes, clutch free throw shooting from Chaffin and his teammates secured the victory. The 6-1 point guard handled much of the ball handling and play-making responsibilities on Saturday night. He finished with 18 points and did it with solid 3-point shooting and slashing scores all night long.

Dalton finished with a game high 22 points in his team’s win over Boyd County on Saturday night. The 6-4 wing forward scored those points in a variety of ways. However, it was his post up game that gave opposing defenders the most trouble. He has a strong frame, combined with quick feet that allow him to score with his back to the basket. We project Dalton to play facing the basket at the next level. However, his athleticism and strength was too much on the inside on this night. If Lawrence County contends for a region championship this year, Dalton will be a big reason why. 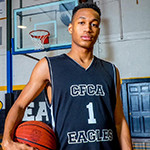 The Charlotte signee had a solid showing on Friday evening versus Huntington Prep. He held his own and proved to be an effective play-maker against one of the nation’s premier Prep School teams. At 6-2, he has a good frame that will allow him to play either back court position at the next level. He was able to get to the rim while also hit long range jumpers all night long. Although Jackson and Cape Fear came up on the short end of the contest, Jackson should come away with added confidence that he can play toe to toe with some of the nation’s best. 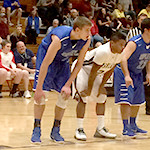 One of the best uncommitted prospects this weekend was Johnson, who is a 6-8 forward. He put up monster numbers in a win over Ashland (KY) on Saturday afternoon. He scored 25 points on 10 of 12 shooting, grabbed 18 rebounds and added four blocks in the win. He already holds offers from schools like Ohio and Winthrop. However, other Power 5 Conference schools like Penn State, Clemson and West Virginia are all watching his progression very closely. Right now Johnson is a hi-lo forward with soft touch around the basket. He has enough bounce to finish amongst the athletes in the lane. However, the intriguing part of his game is his mobility and range on his jumper. Although he did not show his 3-point jumper in this viewing, he has a free throw release that suggests that he could hit the open jumper with ease. Mark Johnson down as a potential spring-summer stock riser in 2016. 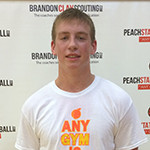 Six-foot-five forward Kenser is a prospect with some of the most potential. The junior showed glimpses of being an impact scorer on the interior. His four buckets in the second half on Saturday night helped Boyd County get within striking distance of Lawrence County. His strong frame and soft touch around the rim allow him to be a go-to scorer on the interior. Consistency will be the next area that we will want to see from Kenser in future evaluations. Given the fact that we have seen the forward stretch the floor with his jumper at the EBA All-American Camp in September, we expect Kenser to become a versatile threat for coach Randy Anderson this season and beyond.

One of the best long-term prospects last weekend was a freshman from Elliott County. His 34 points in a win was impressive. He shot the 3-pointer very well and found a rhythm with the bounce as the night went on. Already standing near 6-2, he has the length and skill to be a very productive high school player. As he grows and matures, expect Spencer to become a hot name within the state of Kentucky. Here is a glimpse into what Spencer did on Friday evening.

’19 Guard Korbin Spencer from Elliott Co. was big at the Boyd Co Roundball Classic. 34 in the win. @EastKYSC pic.twitter.com/P5pDji15En