#OTRHoopsReport: Day One Recap from the Hoop Hall Classic – January 15, 2017

Class of 2018 forward Nazreon Reid of Roselle Catholic had the biggest day with a triple double on day one at the Hoop Hall Classic. Photo cred – @CoachHemi

SPRINGFIELD, Mass., – The Hoop Hall Classic is a staple on the #OTRHoopsReport coverage calendar. The match-ups of premier players yearly gives our staff the ability to gauge which players are ascending in value. Also, as voters on the Naismith Award Committee, this event is instrumental in helping us properly voice which players are most deserving of the end of the year award. 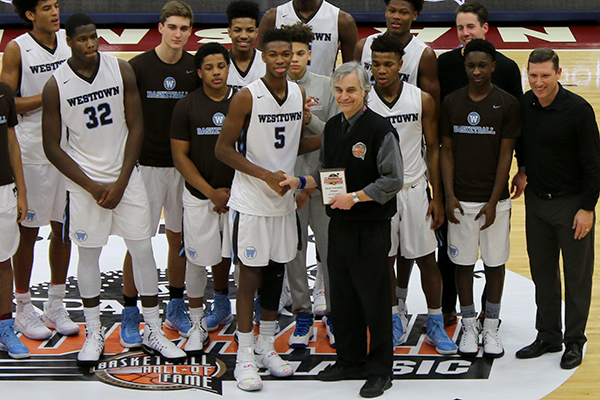 The much anticipated match-up between the nation’s top two big men, DeAndre Ayton (Hillcrest Academy) and Mo Bamba (Westtown), did not disappoint. Both gave great efforts and were actively engaged throughout. However, it was the Arizona signee from Westtown, Brandon Randolph, who would have the biggest game. His 28 points on 11-18 shooting with six assists were the key in Westtown’s victory Saturday evening. He demonstrated play-making skills and long range shot making ability that will translate to the next level. 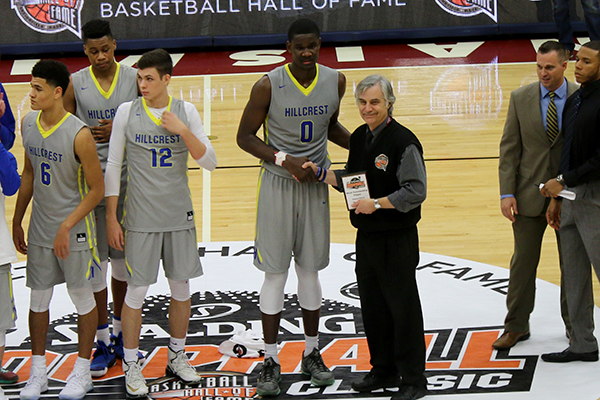 Ayton finished with 21 points on 8-17 shooting to go along with 10 rebounds. Bamba finished with nine points, 14 rebounds and five blocks albeit fighting foul trouble throughout the night. 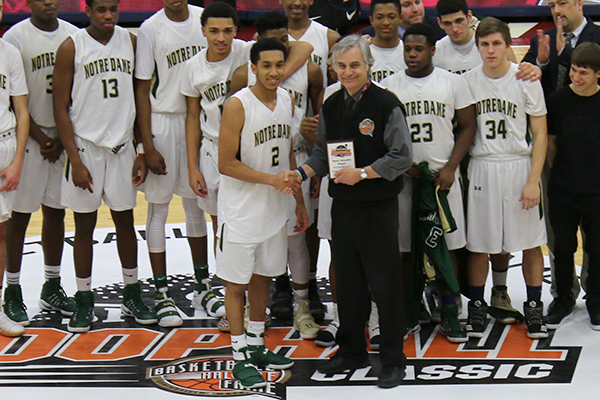 Those who have seen Georgetown bound point guard Tremont Waters know he is capable of taking over at any moment. The 5-foot-8 dynamo did exactly that for Notre Dame Academy in a win over Archbishop Malloy scoring 29 points including 19 in the first half. He connect on 7-10 3-pointers, which included many from many steps behind the arc. He projects to be a contributor next season for the Hoyas. 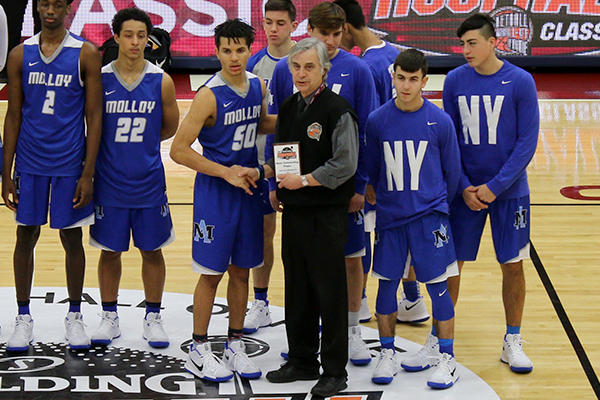 On the other side of the ball Cole Anthony of Archbishop Malloy continues he assent as one of the nation’s premier guards in the 2019 class. He scored 29 points on 9-17 shooting to go along with 7 rebounds and five assists. Moses Brown, a 7-1 class of 2018 center, finished with 12 points and 7 rebounds while showing a high ceiling. 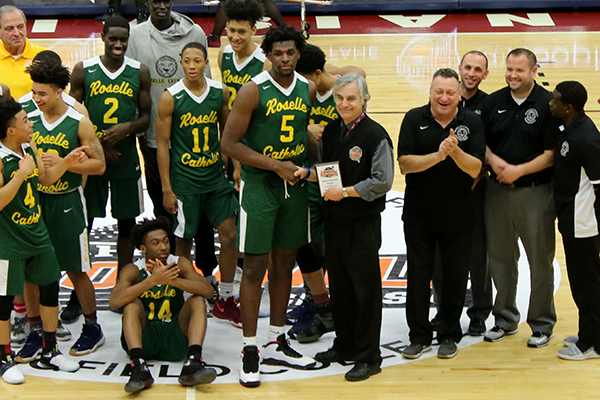 We identified Nazreon Reid as a potential 5-star prospect years ago at the USA Basketball Mini-Camp. Nearly three years later he is turning into the player that we all though he could be. On this day he turned in a great all around performance scoring 24 points on 10-14 shooting while adding 11 rebound and 10 assists. Although he is built like a pro forward already, it is his passing skills and finesse game that he leans upon heavily. 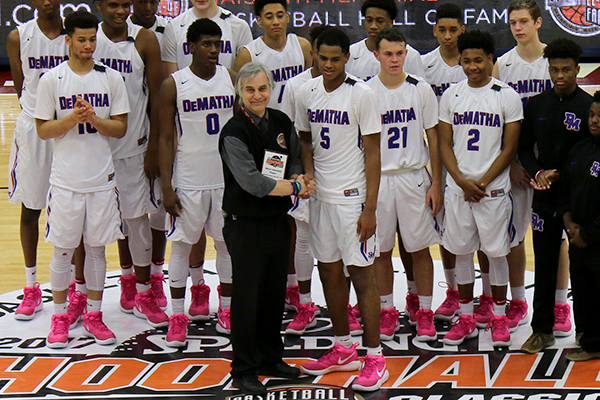 Harvey and O’Bannon Square Off

DeMatha’s DJ Harvey and Bishop Gorman’s Chuck O’Bannon went toe to two on Saturday afternoon. Both gave terrific performances, but Harvey would get the best of O’Bannon on this day. The future Irishman scored 28 points on 8-16 shooting while also connecting on 10-14 shooting. Yet it very well could have been his rebounding (14) that won the game for the Stags. He added three blocks in the win. Harvey has turned into a solid two-way player who is still more than capable of lighting up the scoreboard with jumpers. 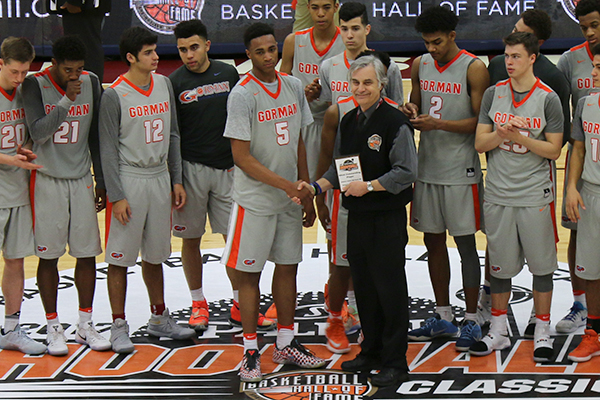 O’Bannon turned in a solid 27 point night, however could not find range on his 3-point shot (1-8).  The USC signee continues to show, however, that he is electric when gliding to the rim to finish. 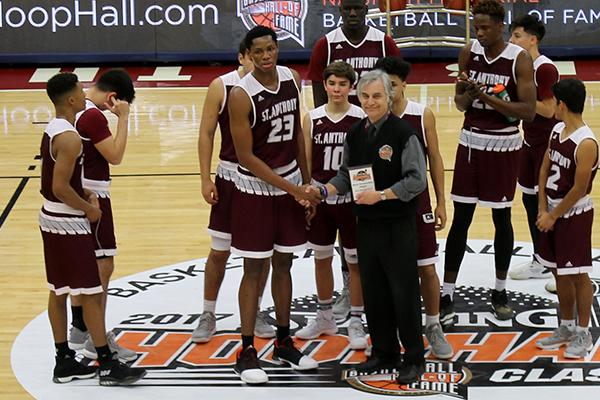 Charles Bassey of St. Anthony is one of the most heralded prospects in the class of 2019. He is skilled and polished both while posting up and facing the basket. Standing at 6-11 he does a great job of playing the hi-lo game with his teammates. He scored 17 points on 7-11 shooting to go along with 14 rebounds and five block shots. 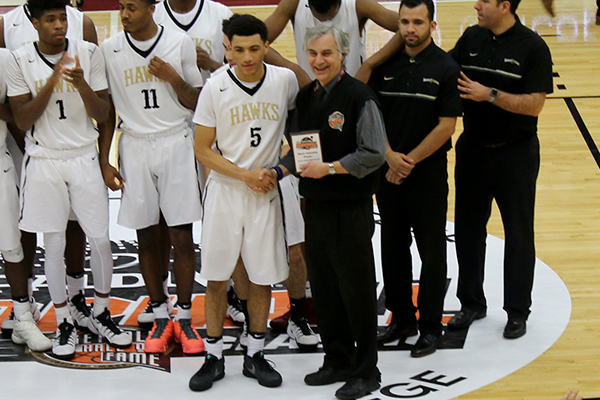 Yet the storyline of this game were the guards from Hudson Catholic. Jahvon Quinerly earned MVP honors with 25 points on 9-15 shooting. However, it was five rebounds and four assists that were most key in the win. Class of 2018 guard Luther Muhammad again showed he is one of the most explosive wing scorers nationally in his class scoring 24 points on 9-16 shooting.