LAWRENCEVILLE, Ga., – June is a month where travel teams can take a breather from travel and competition. However, for individual players this a window where valuable exposure can be gained. The EBA Super 64 camp hosted by Peach State Basketball and owner Brandon Clay provided a platform for players from across the Southeast region. Players gained unparalleled media coverage and evaluations in small camp setting. Here is a look back at a few of the notable names from the camp.

Hillery finished a spring with the Southern Stampede and brought the confidence he gained to this setting. Hillery is showing range with his jumper as he hit multiple 3-point shots this weekend. He also exuded leadership skills as a leader by bringing the ball up the floor and distributing to others in transition. These are positive signs for the rising senior and coach Branden Mayweather as they prepare for a state tournament bid in the state of Georgia.

’17 Jalen Hillery of @CGwinnettBball & @Southstampede getting to rim w/ ease 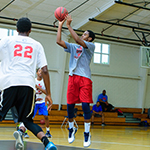 Johnson showed promise during game play on Sunday afternoon. Currently listed as a power forward, he stands at 6-foot-3 and showed the ability to affect the game inside and out. His ability to move up and down the floor in transition gives him versatility that should translate well in upcoming years for the Tampa Titans. He was aggressive in the defensive passing lanes. The skill that caught our eye immediately was his confidence in his left handed jump hook and then followed that up with by knocking down a pair of right handed free-throws. Keep tabs on this promising athlete from the Sunshine State as he develops physically and polishes his skill.

Unlike the aforementioned Johnson who is still growing and filling out physically, Lane is a rising freshman who already looks like a graduating senior. The left-handed wing forward plays like a grown man, which matches his physique. The 6-4 wing has a skill set that is rounding out nicely. He finishes in lane terrifically and has bounce to finish over those in the lane. Add in the fact that he can beat most perimeter defenders with his first step and Lane is projecting to be one of the top newcomers in the state of Georgia this year. 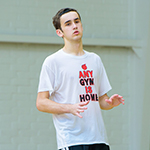 We got a up close look at a budding star in the metro-Atlanta area in Richey. Standing at 6-5, Richey’s specialty is his shooting ability. His compact, easy stroke allows him to connect on a high percentage of looks from beyond the arc. What separates Richey from other stand-still specialists is his ability to put the ball on the deck. He can attack the rim to finish, but his poise to facilitate the action on the perimeter gives him the necessary to balance to play at high levels. At the moment Richey puts us in the mind of 2016 graduate Michael Buckland of High Point, N.C., who will enter his freshman year at Lipscomb this year. 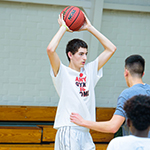 When it comes to basketball, Orr comes from a talent rich family. His older brother Zachary signed to play with Erskine College this year and he has a younger brother who projects to be a fine player in his own right. The 6-5 forward will suit up for coach Mike Cleveland at Banks County this year and is bound to make an impact in Region 7-AA. He showed his ability to flush dunks around the bucket while also having the range to hit jumpers from the perimeter. Keep an eye on the rising junior’s development in the next 18 months.