Look for Norcross (GA) junior forward Issa Muhammad to catch the attention of many colleges around the country. Photo – Ty Freeman

College coaches will bend over backwards to get their hands on a solid big man these days, but the problem is so many young players with size are caught up in the position less basketball that we are starting to see more and more and they abandon the traditional paint play and physical style of play under the boards that a true big brings to the table. Junior big man Issa Muhammad of Norcross High School (GA) showed the other night in an Elite 8 win that he is more than capable of living up to the bill that is a conventional big guy.

The 6-foot-9, Muhammad was masterful in his teams 75-55 win over the states top ranked team McEachern (GA).  It was a breakout game of sorts for Muhammad who has only been playing half a season due to him having to sit after transferring to Norcross from Lakeside HS.  Personally this was the best game that I’ve witnessed from the junior as he tallied 14 points 15 rebounds 5 blocks 2 assists in the win in front of coaches from Georgia Tech, Florida, Alabama, Tennessee and Middle Tennessee State.

The biggest difference from this night and any other night that I’ve seen Muhammad is that he didn’t float on the perimeter at all.  Although the big man can extend the defense with a nice touch from outside, he did all his damage around the rim.  He caught every pass that came his way, stayed physical on the boards on both ends of the floor, his defense on Auburn commit Babatunde Akingbola and fellow junior Jared Jones were great as he neutralized both.  Muhammad’s play in the win made a good Norcross team much more dangerous while helping his cause in the eyes of Division I coaches, as the next day he received an offer from Iowa St.  There are potentially two more games for Muhammad to make an impression as he and his Norcross team embark on the Final Four in hopes of bringing another State Championship back to campus. 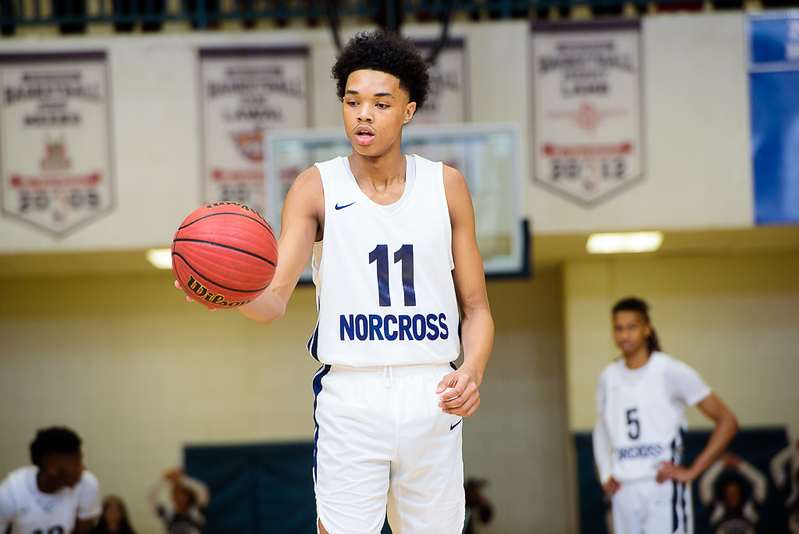 Across the country much has been said about the depth of both the 2020 and 2021 basketball classes.  Although its really early in their development, many kids have been identified as prospects, but there are a ton that still fly under the radar.  6’6 sophomore Brandon Boston (Norcross HS) definitely put his bid in the other night to be recognized as one of the 5 star players in the 2020 class against one of the best teams in the country in McEachern HS.

In an Elite Eight match up in Georgia’s 7A State Playoffs, Boston showed off his versatility and proved he could step up when it counted.  The long lean sophomore played bigger than his frame suggested as he came out the gate with an energy and a determination that lead him to a game high 25 points.  Boston managed to check every column on the stat sheet as he scored from the perimeter, at the rim, and after pulling down offensive rebounds over bigger opponents.

What stood out when it came to Boston’s game wasn’t what he did with the ball in hand, but at this early stage in his career he understands how to make himself available to his teammates by being at the right place at the right time.  He found holes in the defense by moving in and out the without the ball which put him in good rebounding position as well as allowed him to get open looks due to shifting as the defense shifted.  His long arms help him shoot over out stretched arms and also make him a threat on defense where he can help clog the lane and cause deflections, something else you rarely see in a player his age.