Kobi Simmons hopes to lead the Knights back to another state championship. The class of 2016 guard is one of the nation’s best at his position. Photo cred – Ty Freeman

March Madness is officially here. That means the state championship time in the state of Georgia. The GHSA has formatted the state playoffs where every classification will play their championship games this weekend on both the boys and girls side at the Macon Coliseum. We give you a preview of each game and the top players who should be given attention.

We gave bracket predictions at the beggining of the state tournament. You can read how well we did by clicking this link –> GHSA Predictions 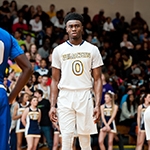 We have documented the talent of both teams extensively over the past year. Wheeler features Naismith Trophy Player of the Year Finalist Jaylen Brown and Tennessee signee Shembari Phillips who power the team’s scoring. Their resume is impressive as they won the City of Palms Classic in December while compiling a 29-2 record on a national schedule. Pebblebrook boasts of the state’s most balance team. Guards Ty Hudson (Clemson) and Jared Harper provide scoring while center Derek Ogbeide (Georgia) gives rim protection and rebounding. The key for this game could come down to how well Trhae Mitchell plays in this game for Pebblebrook. If he can give the Falcons timely buckets as he has done in this playoff run, coach Washington’s team could take home the hardware. On the other side, coach Doug Lipscomb will need sophomore guard Darius Perry to give needed production in terms of ball handling and shot making. 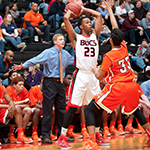 The Bucs from Allatoona have gathered momentum over the past years largely due to the leadership of their head coach Markus Hood. Last season the Bucs finished in the Elite 8 while Hood was named the Atlanta Tip-Off Club Metro coach of the Year (Bobby Cremins Award). This year they have advanced to the school’s first championship after defeating Warner Robins. Hood gets a balanced contribution from his lineup, however watch for junior Ephraim Tshimanga and senior Rodney Brown in this game. Brunswick, on the other hand, comes in with a 28-2 record after defeating Cedar Shoals to get to the championship game. Keep an eye on senior wing Roger Davis who provides strength and athleticism on the court. 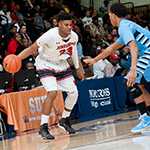 Jonesboro enters this game as the heavy favorite by many around the state. The feature a roster that is deep with talent, athleticism while also being well coached. Coach Daniel Maehlman’s team enters this game 32-1 with their only loss being to national powerhouse Montverde Academy early in the year. Sophomore wing MJ Walker is an ELITE 25 prospect nationally, however it has been the contributions of seniors Austin Donaldson (Chattanooga) and Tracey Hector Jr. that have given the Cardinals the momentum needed in the post season. Carrollton should not be overlooked as they have defeated solid teams in Upson-Lee and Cairo to get here. Montae Glenn is an unsigned senior that brings length and athleticism to the interior. His name was mentioned during the Atlanta Tip-Off Club Meeting as a All-State nominee.

Although many believed that Laney was the favorite to win this bracket, Morgan County proved that experience and a veteran guard play can be the difference in the post season. Mississippi State bound point guard Tookie Brown is a competitor, scorer and a winner and that is the reason why Morgan County is in this game. Forward Jailyn Ingram should not be overlooked in this spot either as he is a great complement to Brown. They will face off versus Jenkins from Savannah. They enter this contest 28-3 on a 18 game winning streak. They are led by Georgia State bound wing Malik Benlevi who averages 16 points per game. 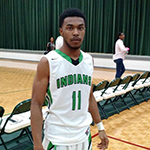 Seminole Country features one of the state’s most dynamic scoring back court in juniors Jordan Harris and Anfernee King. Harris, who is a University of Georgia commit, averages 27 points and 11 rebounds per game. King a 5-10 point guard averages 18 points per game and leads the state in steals with 5.6 steals per game. Crawford on the other hand has blown through the bracket with double digit victories over Thomasville and Swainsboro. Watch for 6-4 junior William Jarrell to be the catalyst for Eagles of Crawford.

Calhoun enters the game 29-2 behind the strong leadership of seniors Quenten Taylor and Sherrod Williams. Interestingly, they have not lost on the road on or on a neutral floor all season. They will face a senior laden team from Greenville. Keep an eye on senior wing Jamal McKee who averages over 20 points per game on the season. 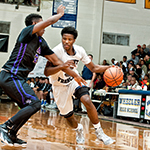 Although coach Drew Catlett is in his first season at the helm for St. Francis, he leads a team who has been there before. The Knights back court of Florida State signee Malik Beasley and ELITE 25 junior Kobi Simmons is the best in the state. Couple that with the length and talent of Kaiser Gates (Xavier) and Josh Coleman (Coastal Carolina) and this team could be the most skilled in the state. They will face off versus an ultra-athletic roster from Greenforest who knocked off Georgia signee Will Jackson and Athens Christian in the Final 4 to reach the finals. Point guard Justin Ravenel provides the ball handling for this team while the athleticism of forwards such as Victor Enoch and Precious Ayah are hard to deal with on the interior. Keep an eye on John Ogwuche and Justin Forrest both guards could help swing the difference in favor of Greenforest in this game.

Jonathan Hemingway is a National Evaluator for the OTRHoopsReport. He is also on the Board of Selectors for the Naismith Trophy.  He is the publisher of CoachHemi.com. He has been involved in the community since 1996 as a coach, camp director and evaluator. You can reach him via email at JonathanHemingway@PeachStateBasketball.com and follow him on twitter @JLHemingwayPSB