Atlanta, Ga – There 2018 Georgia High School Association state playoffs have been filled with many triumphs and disappointments up to this point. We have witnessed talented juggernaut squads suffer emphatic losses, and watched several “Cinderella’s” dance their way into the state semifinals. Hypesouth Media dissects a couple key matchups from varying classifications. 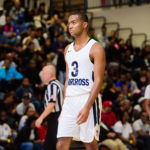 This game sets up to be a dandy. Ashton Hagans and company will collide with a star-studded Norcross bunch at the Buford City Arena on Saturday-March 3, 2018. Brandon Boston Jr and the Blue Devils are coming off a convincing win over heavy title favorite McEachern, while the Rams handled a scrappy Wheeler crew. Both teams have played tough schedules and have encountered just about every in-game scenario possible, so we expect this to be a chess-match from start to finish. Get your popcorn ready!

Ladies and gentlemen: Ashton Hagans. A huge slam to send a fired up crowd into a frenzy. Newton up 77-68 over Wheeler in the 4th.

Keys to the game for Newton: Dre Butler has to continue to make his interior presence felt on both ends, and Tre Clark must knock down shots from downtown.

Keys to the game for Norcross: Jesse McMillan, Dalvin White, and Kyle Sturdivant. The in-game adjustments Coach McMillan makes from the sidelines along with Sturdivant and White directing traffic on the court have been key in the Blue Devils success. They have to continue this trend on Saturday. 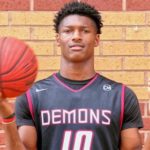 Clarke Central will enter as underdogs, but don’t count the Gladiators out yet, Coach McIntyre will have his troops ready to go. Clarke Central uses a win-by-committee approach, but 6-7 big-man Quamontae Monfort is more than capable of taking a game over if needed.

Warner Robins flaunts one of the more talented backcourt duos in the state. Nelson Phillips, a Georgia State signee, and Jacolbey Owens are matchup nightmares for just about every team they face. When they are in a groove, the Demons are very hard to beat. However, this has been a gift and a curse as Warner Robins gets stagnant at times when its one-two punch are struggling offensively.

Keys to the game for Clarke Central: Continue doing the things that have gotten you this far. No hero ball. Most importantly, do everything possible to stop both Phillips and Owens from going off.

Keys to the game for Warner Robins: We’ve been saying it all year, the others must show up. Champ Dawson, Jaron Zanders, Jaydon Norman etc. have to chip in their contributions. 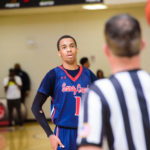 We’ve been eyeing this matchup since the brackets released. As mentioned in our earlier previews, Sandy Creek is the team in 4A that we feel has the best chance to dethrone Upson-Lee. The Patriots have the size in 6-7 TJ Bickerstaff, 6-7 Xavier Brewer, and 6-4 Jarred Godfrey to potentially pose a lot of problems for the Knights. If Sandy Creek can effectively utilize its size to control the boards and shut down the interior, this game could get very interesting.

On the flip side, the nationally ranked “Running Knights” enter with Georgia’s longest active winning streak (61) and have a championship pedigree. Tye Fagan is arguably a top 3 to 5 player in the peach state and is a winner in every sense of the word. At 6-6, 250-pounds, Travon Walker is a bruising strong-forward that controls the glass and has a soft touch around the basket. Most importantly, the chemistry and fan support Upson-Lee will bring with them could ultimately be the determining factor.

Keys to the game for Upson-Lee: Zyrice Scott and Cameron Traylor. If Sandy Creek tries to strategize to take Fagan away, Traylor must be ready to knock down the long-ball and Scott will also need to make the most of scoring opportunities. Further, Scott is at his best when wreaking havoc defensively, so must be locked-in on that end. 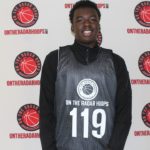 Jenkins will have hometown support Saturday night at Armstrong Atlantic University when it takes on Westside-Macon. Tre’ Mays and Sai Fisher are two experienced senior guards for Jenkins that shoot the cover off the ball. Tyrone Scott also scores it a high-clip for the Warriors. If these three get going, it could get ugly quick.

On the other side, Westside-Macon has one the most feel-good stories in Georgia going right now. The Seminoles lost their “Mr. Everything,” Khavon Moore, to injury in January and were left out to dry by many. The 6-8 Texas Tech commit accounted for over half of the team’s offensive production, but Coach Grube and staff have rallied the troops to a 13-2 record since. Freshmen Javian Mosley and Kowacie Reeves Jr have been key, but seniors Greg Holloway, Omar Jones, and Brenden Anderson will have to lead Westside if they want to advance to the championship game.

Keys to the game for Jenkins-Savannah: Simple, be yourself, continue knocking down 3-pointers and forcing turnovers.

Keys to the game for Westside-Macon: Take care of the ball, play together, and don’t panic under pressure because Jenkins is going to press for a good portion of the game.

Glenn Hills is a talented team that is playing some really good basketball right now. Tim Williamson and Isaiah Bauman are really solid guards that do a little bit of everything well. Timmy Sellers and Emanuel Jones are viable front-court options who are tough as nails.

Glenn Hills has decent size, but Thomasville is huge. 6-9 McDonald’s All-American/Mississippi State commit Reggie Perry is an inside-out beast. His running mate, 6-9 Titus Wright is no slouch himself. After disappointing exits from the state playoffs in previous years, the Bulldogs have seemingly figured it out.

Some of Reggie Perry’s high lights from tonight’s win over Spencer for a spot in the AA final four. #GoBulldogs pic.twitter.com/54MQEXZB1O@Dave_Almeda @Kylelogan24 @KyleSandy355

Keys to the game for Glenn Hills: Don’t get star struck and make Thomasville play your game.

Keys to the game for Thomasville: With Perry and Wright anchoring the interior, Vonterious Woolbright has to continue to shoot it well from the perimeter to keep Glenn Hills honest.