Junior guard Markelle Fultz of DeMatha (MD) has been one of the hottest prospects in the country this year. Photo Cred: Ty Freeman

Norcross, Ga. – The Hilton Invitational has set the bar high for one-day showcases nationwide. Director Jesse McMillan had plenty Division One graded prospects take part in the seven-game set at Norcross High School. With that collection of talent in one place, please believe that we walked away with plenty of knowledge. Here are three prospects who stood above the rest saturday afternoon.

Our staff has seen Fultz in Louisville, Springfield, and Atlanta this season. Each time, he continues to impress. At the Hoop Hall Classic, Fultz earned MVP honors in a win over Roselle Catholic from New Jersey. Fultz is a combo-guard with great size, athleticism, and playmaking ability which makes him an almost impossible match-up in the backcourt. Saturday afternoon, Fultz was effective in the half court set as he was able to get past his defender to finish at the rim or knock down the pull up jumper. Fultz finished with 16 points as Dematha was able to hang on for the win over Pebblebrook. 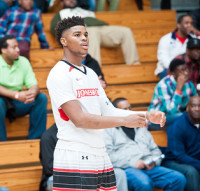 This was one of the biggest match-up’s of the season for a loaded Jonesboro crew as they faced Spain Park from Alabama. Walker is a terrific scorer that attacked the rim both in transition and in the half court set. He did a great job of finishing through contact and drawing fouls where he made the defense pay by knocking down free throws. Walker finished with 16 points as the Cardinals were able to escape a late run from Spain Park to hang on for the win.

Moore is quickly emerging as one of the biggest stock risers this season. After seeing Moore in DC at the High School Hoops Festival and Flyin to the Hoop Tournament in Dayton, Ohio, Moore will have many power conference programs keeping tabs on him this spring and summer. This lead guard did a terrific job running the team, making good decisions and taking care of the ball. Moore pushed the ball and attacked the lane when the transition defense fell asleep. He has a great basketball IQ and has the scoring ability to put up big numbers in a hurry.

Available power forward Cheick Diallo of Our Savior New American (NY) was in attends for the St. Johnson game

2016 guard Dennis Smith Jr. of Trinity Christian (NC) was in attendance for the North Carolina game