Class of 2020 guard Sharife Cooper and Christian Brown had a great weekend together while playing with AOT at the Indi Hoops Tip-Off Classic.

ATLANTA, Georgia, – The Indi Hoops Tip Off Classic brought together some of the top talent in the city last weekend. It gave evaluators and spectators the opportunity to see prospects who are poised for big performances this spring. Here are a couple of the storylines from the weekend.

Christian Brown Links up with AOT for the Weekend

Brown, a consensus top 20 prospect nationally, suited up for AOT and showed up off his 5-star skills. The 6-foot-6 wing puts us in the mind of current Virginia Tech wing, Chris Clarke, with his physical, slashing style. He is probably more college ready than Clarke was at this stage in his development. Brown’s athleticism and shot making ability make him one of the best at the position.

It has been no problem this weekend at all for 2019 top-25 prospect Christian Brown (@cb_kid) of Lower Richland (SC) to fit in with @AOTBasketball at the Indi Hoops Tip Off. Has been very efficient the entire weekend #IHTOC.

Smith made waves this high school season when he moved in to the Atlanta area to play for McEachern High School. College coaches took notice of his play during the school season and will be anxious to his production on the EYBL circuit this spring. In the upcoming week Smith expects to see Missouri and Georgia Tech at his school. On the weekend, Smith once again showed his ability to stretch the floor with his jumper. 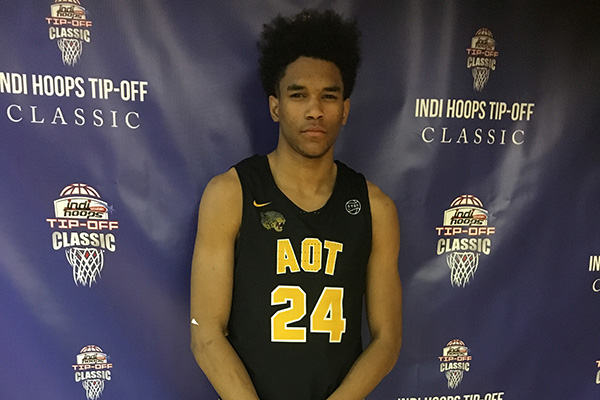 He has connected on (3) three pointers, making shots off the catch or dribble @AOTBasketball

Watford Flexes His Muscles for the Georgia Stars

Trendon Watford, Birmingham, Alabama, native, is far from a secret. He is a top ten prospect nationally and has been active on the EYBL circuit in the past two summers. This year he is poised for another monster year. He is a versatile producer who can score in the paint or on the perimeter. The 6-8 wing-forward is a match-up nightmare for opponents as he can take slower players off the dribble or score over the top of smaller defenders. Per Corey Evans of Rivals.com, LSU and Vanderbilt will complete an in-home visit with the 5-star recruit today.

Recruiting Notes from the Weekend

Class of 2019 5-star forward Will Baker of Texas, has visits scheduled with North Carolina, Texas, Texas A&M and UCLA.

Class of 2019 guard Brenden Tucker of Dacula, Georgia, picked up an offer from Xavier. He plays for the Atlanta Celtics this spring.

Tye Fagan, once a MTSU commit, is now back on the board as an available 2018 recruit. Coach Tom Crean’s staff quickly jumped into the mix giving the scoring guard an offer. Fagan was arguably the state’s premier scorer behind Langston Hughes’ guard Landers Nolley (Virginia Tech).

Antwann Jones of Florida, gave his verbal commitment to Memphis University and head coach Penny Hardaway. Jones has a pro-like body and a skill set to match. If he can put it all together consistently, look for him to become one of the breakout players next season.