Deivon Smith has of Grayson (GA) has put up big numbers this season for the Rams. Photo – Ty Freeman

Atlanta, Ga – This week we taken a look into the future by focusing on the class of 2020. The talent from around the nation is deep as numerous prospects from the 2020 class have already made an impact on the national scene. Here is a look at a few of names from around the state of Georgia. 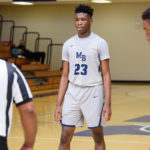 Meka is a rapidly developing power forward with all the makings of being one of the top players in the 2020 class. Hall has very good size and has an excellent basketball body. Meka runs the floor well and he finishes at the rim as well. He displayed a variety of low post scoring moves, including jump hooks, and counter moves in the post. He is a relentless rebounder, and a very effective defensive player. He always plays with intensity, and is a hard-nosed competitor. 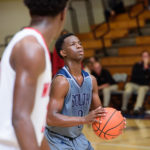 An explosive, lighting quick point guard who is clever with the ball in his hands. Jackson a good job of handling the break as he pushes the ball coast to coast with a speed dribble. This scoring point guard can take it all the way to the rim and score or make the pass from his penetration to an open teammate. From his penetration, he does a good job at reading the help and dumping off to an open teammate under the basket or behind the line.

A physically dominant player, Mann has the ability to overpower defenders with his college ready body is what separates him from the pack. He goes strong to the rim, going right at any shot-blocker, and consequently getting to the free-throw line in high volume. Mann gets to the rim with ease and finishes through contact with his powerful jumping ability. He is a good rebounder on both ends in his area and can rebound in a crowd because of his strength.

Smith has a strong frame and his athleticism is off the charts. He has that highly coveted second gear you look for in a point guard as he gets to the rim off the dribble at a frequent rate. He has a very slick handle and he changes speeds/direction well.  He can score with a runner or floater in the lane. In addition, he can finish with either hand and utilizes his strength to get around the bigger defenders.

A long and athletic swingman, Lane scores by filling lanes in transition, slashing to the rim, or pulling up in the mid-range area. He plays with great energy and urgency at all times. He is strong enough to score through contact and finish or draw fouls. Defensively, Lane is very effective using his length and quickness to both contain and disturb the ball-handler.

Johnson is a shooting guard that is always on the attack. He gets to the rim in transition and finishes with layups and pull up jumpers. He has a great burst of speed and terrific first step that allows him to beat defenders off the dribble. Johnson is averaging 17 points per game this season. Defensively applies good pressure on the ball and is alert away from the ball to help cut off a drive.