Cole Anthony has exceed expections this spring with his play in the Nike EYBL.

Atlanta, Georgia – There were many players who lived up to the expectations that have been set while others jumped on the national radar this spring. Our staff took a look at several players who played above the rest

Cole Anthony without question arguably had the best spring on the AAU circuit. The rising senior is averaging currently 26.9 points per game on the 2018 Nike EYBL circuit, which features the top nationally known prospects. Cole is currently ranked as the #1 point guard (#6 overall) in the class of 2019. Some scouts and evaluators have argued that Cole can possibly end up as the #1 player in the class of 2019 if he continues to have the type of spring/summer he is currently having. He is an extremely explosive guard and an aggressive attacker. Anthony is a pure scoring guard with great IQ and feel for the game. When watching Cole, you will always notice that he is a non-selfish player and will always look to get his teammates involve for scoring opportunities. He is also a vocal guy, so you will always hear his voice whether he is on the floor or supporting his teammates from the bench.

Jaden Springer, who currently is the third leading scorer in the UAA (21.1 ppg), is a tough hard-nosed guard out of the Charlotte area. Springer stock has risen this summer due to his guard play and his array of ways to score the basketball. In my opinion, he has some shades of current NBA all-star Jimmy Butler. At the two-guard position, Jaden has a nice body frame, which helps him on both ends of the floor. Jaden has become one of the best on ball defenders this spring and has certainly been making his case for one of the top players in his class. His footwork is amazing and his ability to create his shots of the dribble have been very impressive so far, this AAU season. His tremendous play has secured B Maze Elite (TN) to a 5-3 UAA record. 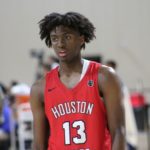 Recent Kentucky commit Tyrese Maxey is currently one of the leading regular season MVP candidates in this year’s Nike EYBL. He is averaging 22.1 points per game thus far in his last EYBL season. Maxey is the definition of an elite guard. This kid plays with great energy, whether he’s on offense or defense and can score the ball in a couple of ways. He’s a pure shooter from deep and can also knock down his mid-range jumpers. He has a smooth release that is somewhat quick & has the ability to create his own shot. Maxey could be considered a top ten prospect by the end of the summer. He can score at will and can get hot in a blink of an eye.

The 6’0 floor general Jalen Benjamin has put scouts and evaluators on noticed this spring. He is the leading point guard for one of the top 17U teams in the nation in Stackhouse Elite (NC), who are currently 8-1 on the Adidas Gauntlet. He might be undersized but Jalen makes up for his size with his skillset, especially on the offensive side of the ball. He can read and react to the defense effortlessly and is able to get inside the opponent’s paint to facilitate. Jalen also displays a jump shot that cannot go unnoticed. His shot making skill is another asset that helps Jalen redeem his size, much like a Tyler Ulis. He is a knock down shot maker and is able to create his own shot off the dribble. 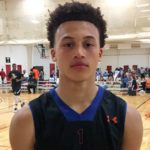 If anyone has had a huge spring, then Chase Hunter of Georgia’s own Westlake High School is for sure to be on that list. The rising senior has received offers already from Clemson, Nebraskan Virginia Tech, Texas Tech, VCU, and more this spring running with Atlanta Express. Chase is a great sized combo guard with a terrific body frame. He is a versatile attacking guard with major athleticism and bounce. One of the main attributes Chase holds is his ways of creating his own shot off the dribble plus connecting on those shots. He is unique and is also a vicious dunker whether he is in transition or in the half court. Expect his recruiting process to sky rocket after the July live period.

There are not many players in the country who had a better summer then Smith. After attending the Sweet 16 Session I and II during the April evaluation period, Smith added 18 offers from the likes of Alabama, Auburn, Florida, Georgia, Kansas State, LSU, Iowa State, and Seton Hall. Smith scored in such high volume without forcing much, getting the vast majority of his shots in the flow and making a variety of nice passes up the floor in transition as well as off the dribble. While he made a couple of threes in rhythm early and also attacked the rim going right, his bread and butter was always his mid-range game.

Which five-star that reminds me some of Lonzo Ball has Duke and Michigan State getting involved? The rise of Diante Smith and Austin Harvell plus much more in my live blog from Saturday https://t.co/dXiyGocMJy pic.twitter.com/Ppir2KXUae 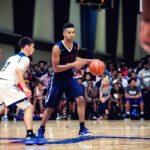 Here is another one of Georgia’s own athlete we can claim. Coming off his state championship run with Norcross, Kyle Sturdivant was still not nationally recognized as one of the top players in his class this past high school season. He did not have much buzz coming into this EYBL season, even as a veteran in the league, but soon enough Kyle was able to put those who do not known him very well on notice this spring. Sturdivant is currently averaging 16.4 points per game with his NTF squad. One of the top underrated guards in the country, his game on the floor should speak for itself. His IQ, ball handling, and body control when driving to the bucket are the main strengths we are able to notice about him on the floor. A rare combo guard who can score and get his teammates involved.