Coach Kevin Ollie’s success at UConn has been tied to his superb recruiting. Sterling Gibbs (left) and Jalen Adams (center) were decorated players before suiting up for the Huskies. Photo cred – @UConnMBB/Twitter

Editor’s Note: We will look at several OTRHoopsReport.com college subscriber’s recruiting classes over the next few weeks. The next school up is Mississippi State.

Kevin Ollie and his staff hit another home run with this year’s 2016 recruiting class. In all the Huskies bring in two 5-star and 2 4-star prospects. This type of recruiting should keep UConn in the conversation for NCAA Tournament births year after year. Here is a closer look at this year’s signees. 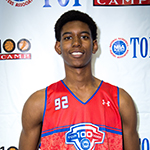 Durham’s length and athleticism reminds us of a young John Henson. Ironically, Henson also finished his high school career in Tampa. Durham, a class of 2016 graduate, is a legitimate option at the power forward position. We project the five-star caliber prospect’s skill set to allow him to knock down the open jumpshot as the trail post player in the secondary transition break. Durham hit a 3-pointer during the Sunday morning session in rhythm. He has a bit of hitch in his shooting mechanics but it did not prevent him from shooting the ball with confidence. Defensively, he’s got bounce to his step and was a factor guarding the inbounds as well as trapping the first pass during the press breakdown segment on Sunday. Durham’s longterm projection will depend on his willingness to affect the game on both ends as he did here. 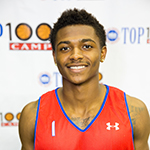 Despite not shooting the ball that well today, Gilbert was one of the top point guards on the circuit. He averaged 15 points and 5 assists for the year. His 41% and 33% shooting percentages are modest, but he is an effective play-maker off the drive. He does a good job of finding the open teammate in the half-court. 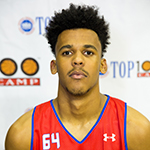 Jackson reminds me of Braxton Key, but I think Jackson is a bit more skilled at getting his shot inside and out. He is a big wing who embraces the physicality in the paint. He struggled to find rhythm this weekend. He put up 8 & 8 and 10 & 5 on consecutive nights.

We will see him next weekend at the Hoop Hall Classic in Springfield, Mass.