Atlanta, Ga, – The Best of the Best Camp sponsored by Under Armour brought together some of the nation’s best young talent last weekend at Maynard Jackson High School. Headed up by ATL Xpress director, Winfred Jordan, the camp featured over 100 prospects who will be entering the 7th through 9th grade next season. Here is a peak into the future of just a few of the notable players at the camp.

Under Armour Best of the Best Camp Standouts

(Heights, Years and City and State were not available at the time of evaluation)
One of the better shot blockers at the camp was Babatunde Akingbola. His timing for a big man is impressive. He also did a good job of blocking out and rebounding in the paint. 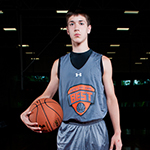 Collin Kenny impressed with his poise and combo-guard skills. However, his specialty of shooting the basketball will have him seeing quality court time in the future.

One of the better young point guards in the camp was Sharife Cooper. His vision for the court and his ability to shake defenders make him a tough cover for any defender. Cooper has a point guard bloodline as his older sister, Te’a Cooper, was a McDonald’s All-American and will be a freshman at the University of Tennessee next season.

Che Evans has a mature game even though he will not hit the halls of high school for another year. He has impressive springs that allow him to finish in transition. His size and skill point to a bright future.

Zebedee Graham showed great energy as a point guard. He showed a number of skills as a lead handler, which included hitting jumpers off the ball screen and floaters in the lane. His scoring mentality instantly made him one of the better points guards at the camp.

Ashton Hagans is a an athletic guard who showed his ability to slash and finish at the rim. He has good size and combines that with solid upper body strength. 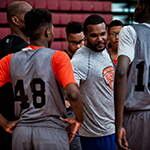 Power forward Mako Marin is a solid prospect in terms of size and skill. He showed a nice jump hook off a baseline out of bounds set while also cleaning up the glass in his area.
Keep Ireaziquanye Mitchell on the radar in future evaluations. His game is diverse and fearless. He showed the ability to attack the lane and score past bigger post players.

Marvin Price is a terrific athlete as a wing forward. His ability to finish above the rim while also creating with the dribble was impressive. 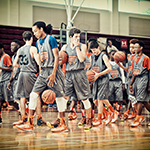 We really like the potential of Isaiah Todd. He is a high energy post player that does all the little things needed to be productive. He screens, sprints the floor and rebounds. Add in the fact that he scores the ball at a high percentage and all the ingredients are there for a big future.

Great point guard play was a theme at the camp and Antonio Thomas fell in line with the trend. He is a natural distributor who loves to get his teammates involved. He displayed great IQ while playing with high energy.

Lorenzo White is a shooting guard that showed grit at the camp. His toughness, size and ability to get to the cup make him a notable prospect.

Any information about any prospects at the camp (heights, years, hometown, etc.) can be shared with our staff by emailing us at JonathanHemingway@PeachStateBasketball.com