WHAT HAPPENED: Walnut Grove W 63-34 – Wanted to get another look at 5A playoff threat WGHS this regular season and they were sharp in handling a feisty but undermanned Apalachee group playing without star forward Josue Capeles-Torres. 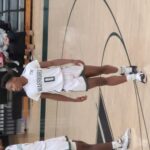 WALNUT GROVE STANDOUTS: As this season wears on the young backcourt of 2024 SG Tyler Jewell and 2025 PG Marcus Smith becomes more and more intriguing. The Warriors have steady seniors in John Knott, DeMyron Williams and Amar Maccius as part of the regular rotation, but these two, who played together and were so impressive this summer at the US Games at LakePoint, have continued to show off their varied skills. Jewell is so composed for a young player and has one of the prettier 3-pt strokes I’ve seen this season, you can almost see his mind working as he carves up defenses looking for opportunities for himself and others. Smith is way ahead of the curve IQ-wise for a freshman, and can really get moving out in space with the ball, and even though both are below the 6-foot line, they possess such strong intangible qualities to go with the burgeoning skillsets that it’s going to be fun for the next 2 years out at the Grove. 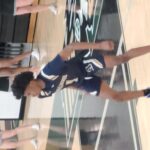 APALACHEE STANDOUTS: Six-foot junior wing Tushyne Johnson was bottled up by the Warrior’s excellent depth and defensive pressure in the 1st half, but came alive in the 2nd with a mixture of flashy drives and 3-pt bombing that was noticeable.

KEEP AN EYE ON Valdy Zephir >> Shawn Walker is the team’s frontcourt engine, but this 6-8 senior forward perhaps holds a hidden key I believe to any deep playoff run for The Grove. While it is and will likely remain a guard’s game these days, and the Warriors come at you with about 7 of those that can hurt you, Zephir’s size, mobility, shot-blocking and shooting range will be called upon in a big spot come 5A Bracket time. His ability to do all of those things well AND stay on the floor against other teams with size may very well be the catalyst for a trip to Macon.

WHAT HAPPENED: Rabun Gap W 76-49 – Perhaps not the fact that RG won this game, as Buford was without star senior guard Alahn Sumler, but it was the deficit that had many of us there a bit surprised as they went out early and kept a really good Wolves team at bay virtually the whole way. Still, the Eagles have a very strong team playing out of the NCISAA Carolinas league despite being within the state border, as they play a mixed schedule of some GA teams and ones from their own league. 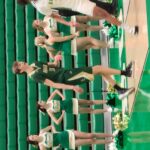 RABUN GAP STANDOUTS: Nate Brafford’s 30-point performance was perhaps the best individual scoring display I have seen all season so far. We know of the still unsigned senior’s interesting skillset from his summer play, as the lean 6-9 wing gets a lot done out there even though it appears he isn’t moving all that swiftly. It’s deceiving, as his long stride in part accomplishes the blow-by as much as his deft mind and advanced ability does. The deep shooting is almost unguardable as 4 to 5 steps past the arc is a mere stop and pop for the rangy gunner. Brafford’s joined on this fascinating team by a pair of juniors to watch next year when he’s gone – 6-10 center Domas Kauzonas, a highly-skilled post at both ends who adds some shooting touch out to 15 feet, and 6-1 PG Theo Antinori, another deep-range bomber who has great court awareness as a lead man and is a slick finisher cutting up defenses. 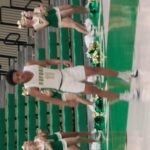 BUFORD STANDOUTS: The Wolves had a different look without their breakout senior Sumler and his ability to stretch defenses while also being a terror on the bounce into the mid-range. Picking up some of that slack was outstanding junior PG Malachi Brown, one of the state’s top 2023 guards. So advanced are both his mind and abilities he makes running a team look easy even when we know at the 6A level it is not. The shooting range, ballhandling, passing, strength to get to the basket, instinctive and sound defense, it’s all there for the 6-0 Brown, as when teamed with Sumler the two make for a top upper-divisions backcourt. Senior Jaylon Taylor came on against the bigger RG roster later in the game, and once again had on display some of that harnessed, emotionally-contained game of deep shooting and creative slashing that has always been there for the 6-7 wing but seems to be thriving more consistently under the new Benji Wood-regime in Wolves country. 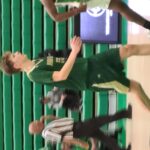 KEEP AN EYE ON Kauzonas >> The word in D1 circles must surely already be out about the 6-10 Lithuanian-import, as he’s far too skilled to have escaped mention in the social media age. This will naturally be a huge summer for him as he puts on the skilled display as a post before more coaches, and with Brafford moving on he will likely become the centerpiece of the Eagles offense next winter.