Let’s take a look at a couple of scrimmages I dropped in on last week, now back from the Faces of the future Middle School Showcase in Florida (exclusive content to come), and look ahead to this week and what I have planned: 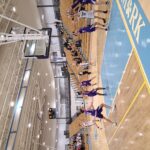 WHAT HAPPENED: Denmark, even without their now ineligible international transfers – 2022 Nordin Kapic and 2023’s Keinan McFarlande and Chad Molloy – cruised past what will be later in the season a really solid KRCS club. Danes HC Tyler Whitlock and the school have put on a feverish pitch to get their internationals eligible, but according to my sources, despite seemingly having everything in order for all 3 to the letter, the GHSA has rather-defiantly ruled all of them will be not able to play Varsity this year. It’s perplexing based on the information I’ve received, but ultimately it means Kapic will be playing elsewhere this winter, most likely in a non-GHSA type setting, while the two Virgin Island natives will actually be able to play JV at Denmark this season and likely be Ok’d for Varsity play next fall. As for the game, guards will be the key for what’s now an undersized Danes team, senior Jayden Hilliman will be forced to play the 5 at around 6-4, and while he’s as hard a worker as there is in the northern burbs of ATL, it’s a lot to ask against some of the frontlines they’ll be facing. Fellow 2022’s Jackson Gibree and Avery Barnett will be even more key both as perimeter threats and savvy ballhandlers in support of star wing Kourtland Tolbert, while 5-10 sophomore Vaughn Garcia stepped in nicely at PG at times and was stout and quick with the ball.

KEEP AN EYE ON Stefan Davidov (Denmark)>> The 6-3 junior wing made an impression on me last year in spot duty and has a pretty stroke from distance, he got hot last Tuesday as the Danes pulled away with the deep ball and even though he’s wiry uses some add’l length well on the attack.

King’s Ridge has a talented core, and clearly was not what they’ll be in January, as some cold shooting stretches and light contributions from a few key guys were too much to overcome. But with 6-6 junior Micah Hoover patrolling the interior and a dangerous perimeter group that includes seniors Liam Thomas and Carson Wolfel and juniors Isaac Martin and Zak Thomas, this will be a team that should find its form relatively quickly, and with a healthy and aggressively-engaged Hoover is a bit of an unsung threat in A-Private.

KEEP AN EYE ON Jack Thomas (KRCS) >> Was a summer highlight playing with Reach Higher Kings 16U, the 6-4 junior is a bit more of a polished scorer than older brother senior guard Liam. He has a really quick first step off the bounce, a lot of creativity at the basket, and uses what is already a solid frame to be a real terror coming in off the fast break. 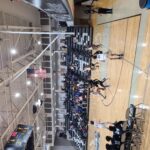 WHAT HAPPENED: Josh Reed is what happened, and he’s going to be a tough ask for a lot of teams to deal with in this his final season for Pace Academy. NAHS was without two of its top three scoring threats, but Reed picked up right where he left off all summer in his physical and crafty domination as a scorer. It’s great to see a star player still working as hard as Reed does even in a scrimmage, as he goes to the glass at 6-6 like a center and glides past defenders using the dribble like a guard. The Cincinnati-bound prospect is special and fun to watch for any basketball junkie. The remaining 3 of what will be the 4-man base for the Knights – sophomore guards Kyle Greene Jr and LJ Moore and freshman center Bryson Tiller – looked solid and savvy despite their youth, and their speedy continued growth will be a key for Pace if they expect to be back in Macon defending their 2 straight AA titles.

KEEP AN EYE ON Bryson Tiller (Pace) >> The 6-8 freshman is quickly entrenching himself as one of the top 2025’s in the state, he’s long and agile at both ends and has plenty of skill already from 12 feet in. His growth and potential as an all-court scorer and defender seem almost endless.

Without TJ Lewis and Jalen Lane (both nursing injuries), it seemed going in points were going to be tough to come by for North Atlanta. Senior guard K’hamani Olivacce is that third scorer I referenced above, he’s got some sizzle in his game and did his part to try and pick up the slack, but they’ll need to develop some of their complimentary options even when Lewis and Lane return to put together a campaign resembling last year’s 20-win season.

KEEP AN EYE ON Kenny Calvin (NAHS) >> The San Diego-transfer is nowhere near ingratiated into this lineup, but at 6-2 with some athletic skills that are noticeable, the senior can become a viable 4th option for a team that will lack size and will need to be a perimeter force as a group to ensure another trip to the 6A bracket. 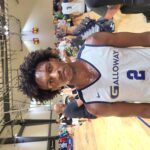 WHAT HAPPENED: Anthony Arrington of Galloway was spectacular with 28-often incredible points, showing off once again why the 6-2 senior is one of the truly under-appreciated guards in the entire state. All he does is put up numbers against whomever he faces, often marquee teams in higher classifications, and rebound, defend and pass like the D1 player he frankly is. Fellow senior guard Quentin Alterman, quite underrated himself, had a slow start as Wilson’s aggressive and excellent half-court D bottled him up, but he rallied to finish with 17 points (8-10 from the line) in a 68-53 win.

KEEP AN EYE ON Amir Arrington (Galloway) >> The sophomore shooting guard doesn’t have brother Anthony’s size just yet, but he can pull the J from any spot and wasn’t shy about it. He sets up as a potentially critical perimeter piece as a spot-up shooter with the drive and dish abilities both Arrington and Alterman excel at.

Wilson Academy is a definite threat in the GISA ranks, as they feature a young and intriguing group around senior forward Ja’Quez Wright. Wright didn’t have one of his signature games Friday night, but he’s a beast at times inside the painted area with a powerful body at 6-3 and slick maneuverability. Three points combined from sophomore SG Joseph Sonson and junior PG Isaiah Cameron will not be an ideal recipe moving forward for this perimeter-based group, but they have options for picking up the slack. Sophomore-riser Terryon Stebbins knocked down five 3’s and had 16 on the game, and 6-3 soph forward Antonio Zackary showed off some versatility as an inside-out scoring threat.

KEEP AN EYE ON Jeremiah Ruffin (Wilson) >> The 6-3 freshman combo guard might frankly be their best prospect, he stood out to me in the fall league at ISA, and looked even better now that the official season was underway, combining elite athletic ability already with an advanced knowledge of a multi-level attack with the ball.

WHERE I’M HEADED THIS WEEK (BARRING THE UNFORESEEN)

On the Radar Hoops Tip-Off Classic