Class of 2017 guard Trevon Duval of IMG Academy put on a show at the Holiday Hoopsgiving. Photo cred – Ty Freeman

ATLANTA, Ga., – Thanksgiving is becoming a time where basketball fans can see most of the top players in the city, if not the state, by visiting a couple of showcases. The OTR Thanksgiving Showcase featured several of the areas premier players last Saturday. And the Holiday Hoopsgiving, played at Holy Innocents School, brought together talent from across the country to be showcased for fans and college coaches alike. Our #OTRHoopsReport staff was on hand for Friday evening to take in the action. You can also hear me give color commentary on the @SUVtv for the days last three games below. 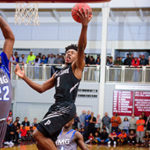 This was the match-up everyone wanted to see and they got a great game. In the end, Duval’s IMG team won the game 99-94 over Sexton’s Pebblebrook Falcons. The pure entertainment factor of the game certainly lived up to it’s billing. Sexton brought his signature fierceness en route to a 39 point performance. Duval scored 24 on 10-20 shooting with six assists. It is worth noting the contrast of styles between the top two guards nationally. Sexton is a scoring machine who can get (and usually make) his shot at any given moment on the court. Duval’s offensive aptitude is elite as well. Yet he is more willing to act as a facilitator and keep the ball moving as a pure point guard at this stage. Any guess as to who will have the longer pro career after this match-up is anyone’s guess. Both have questions to answer in their next step, but we can walk away knowing that we saw one of the premier face-offs of 5-star guards in recent memories.

A Trio of Rams 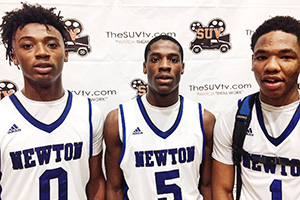 It is not hard to find a good guard in metro-Atlanta. Even an elite guard tandem like Malik Beasley and Kobi Simmons two years ago at St. Francis can be tracked down with some frequency. However, to find three talents like coach Rick Rasmussen has in his back court is truly unique. In a showdown with last year’s class AAAAA state champion, Liberty County, the combo of Ashton Hagans, JD Notae and Isaiah Miller put up 86 points on the way to a convincing 104-71 win. Hagans, a class of 2019 prep, is making a strong case to be considered one of the nation’s premier players at his position. He poured in a game high 32 points on 11-18 shooting. Senior guard, Notae, added 23 points and 11 rebounds while providing a surprising interior scoring threat. Notae inked his NLI to Jacksonville University this fall. Miller, still yet to commit, added an incredibly efficient 31 points on 15-21 shooting. After the win versus Liberty County on Friday, the Rams backed it up with another impressive win over Berkmar on Saturday at the OTR Thanksgiving Showcase. It is clear that few teams will have the manpower to match the athleticism, strength and scoring abilities of the Rams. 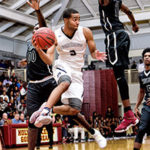 Facing a nationally ranked opponent like Greenforest Academy will tell a team exactly where they stand. The Eagle frontline boasts of 7-foot center Ikey Obiagu, 6-8 Victor Enoh and 6-10 Abayomi Iyiola. They also come off the bench with 6-9 post Mohammed Abdusalem. Coach Jesse McMillian’s squad jumped out to an early double digit lead and hung on to win 57-46. What will make the Blue Devils so dangerous this year is their ability to get points from their guards and posts. Georgia signee Rayshaun Hammonds should be the team’s focal point this year. Given his versatility to score inside and out, he is a kid who can take advantage of mismatches in isolation situations. Louisville signee Lance Thomas is another versatile interior presence at 6-10. Like Hammonds, Thomas has the ability to face the basket and stretch the defense, which opens the paint for McMillian’s slashing guards. The sparkplug for this team will be Dalvin White. The junior combo guard is a 8-0 run waiting to happen because of his jump shooting ability and affinity to finish in transition. Sophomore Kyle Sturdivant is a guard who will only get better as the year goes along. He has all the tools to be a double digit scorer nightly. The glue kid the Blue Devils is Jordan Goldwire. He showed his ability to get steals and deflections to be a real problem on the defensive end. His offensive skill set keeps Norcross afloat when they lose rhythm.

Go ahead and stamp Liberty County junior guard Will Richardson as a certified play-maker. With offers already from Georgia and Auburn, Richardson showed why as he let the nets up for 33 points while also shooting 4-7 from 3 point range. 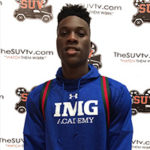 IMG forward Emmit Williams showed why he is a 5-star talent in the class of 2018. No one had more thunderous dunks than the 6-8 man child. He finished the game with 21 points and 9 rebounds.

It was apparent that Greenforest missed leading scorer Justin Forest in their game. However, David Quimby was a bright spot in the back court for the Eagles. He was his team’s only scorer in double figures as he scored 15 and showed his ability to create and make shots in this game.