#OTRHoopsReport: Underclassmen Surging at EYBL – May 25, 2017

The final stop of the EYBL circuit takes place this weekend in Los Angeles. This week we take a look at a few underclassmen prospects that are making waves on the EYBL circuit. We mentioned two underclassmen last week in RJ Barrett (Session III Standouts) and Jalen Lecque (On the Rise) in previous recaps. This week we round out the list with a group that will be hot recruiting names in the upcoming months.

Here is a forward that you need to learn about very quickly. The 6-8 combo forward showed terrific versatility at Session III in Atlanta. He worked the pinch post game well by scoring and distributing. He works decisively and typically efficiently. He still has room to physically mature as he is listed only at 185 pounds. However, he is scoring 18 and half points per game on nearly 49 percent field goal shooting. He has only made seven 3-pointers this season, but his stroke looked compact and confident. Combine all of that with his seven rebounds per game and Brooks seems a lock to be a 5-star recruit in the class. Per Endless Motor Sports, Brooks says that Michigan State, Purdue and Indiana are showing the most interest currently.

Carey has exerted himself as a top five player in the class of 2019 this spring. RJ Barrett seems to have a lock on the current top spot in the class as he leads the EYBL in scoring. However, Carey’s size, athleticism and scoring ability could make him every bit as valuable as a recruit at the next level. Currently averaging 18 points per game and shooting at 56 percent clip, Carey is a difficult match-up for forwards. He stands 6-10 and is listed at 245 pounds. He has a special blend of power and footwork that make him difficult to contain. In a match-up versus BABC we saw him protect the rim defensively as well. 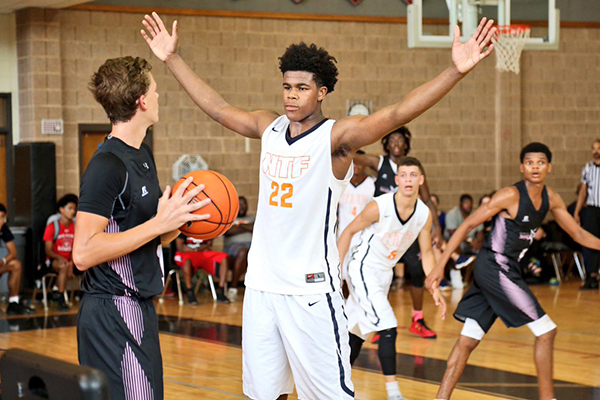 In an age of floor spacers and stretch centers, there is still a place for highly productive interior players. Cockburn is a throwback space eater who scores efficiently and grabs rebounds at a high rate. He is well built at 6-11, 250 and is not easily moved off of his mark. His numbers are impressive too as he scores 12 points per game on 60% shooting to go along with nearly 10 rebounds per contest. Per Eric Bossi of Rivals.com, Cockburn picked up offers from Oregon and Illinois at the beginning of the month.

You do not need a stat sheet to figure out that Jeffries can play. The eye test tells you that. Playing on a well balanced Team Penny squad, Jeffries fulfills several roles including a secondary handler and a versatile defender. Standing 6-8, he can defend on the frontline and can guard most back-court players. Perhaps the most valuable part of Jeffries game is his feel. While being active on the glass, he never seems to exert more energy than necessary which keeps him from picking up useless fouls. His numbers this year are solid: 11.5 points, 50 percent field goal, 4.6 rebounds per game. Per Shun Williams, Jeffries picked up offers from Florida and Iowa State this year.

Maxey is a hyper-athletic guard who is exerting himself as one of the top guards on the circuit this year. He is a terrific finisher in transition while also being a proficient shooter from range (24-63 for 38% from 3pt range). He is averaging 16 points per game on 46% shooting. He still has room to grow with his play creation for others as he only averages 2 assists per game. However, he projects to be one of the premier guards coming out of the Lone Star State next year. Per Endless Motor Sports, Maxey lists Stanford, Florida State, West Virginia and UNLV as offers he has picked up this month. He has also been invited to NBPA Camp and Nike Elite 100 Camp during the month of June.